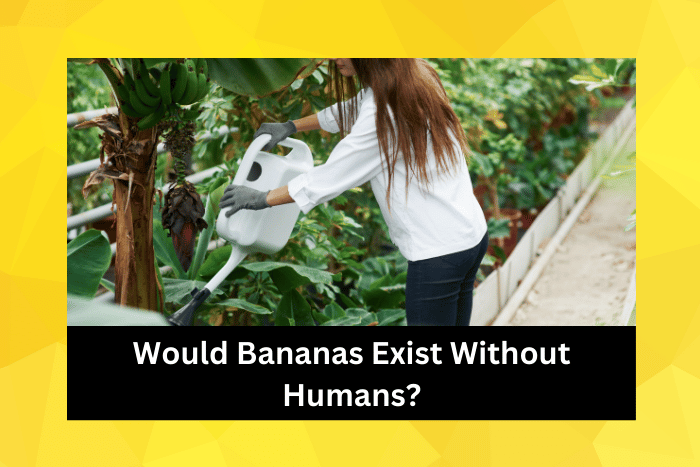 I’m sure you’re not the only one to wonder, would bananas exist without humans?

As much as most of us love our yellow fruit, you can’t help but speculate whether bananas are completely natural.

Okay, in the modern day and age, it’s easy to see how man has taken over the production and transportation of bananas.

But was it always this way?

Allow me to explain just how much influence we humans have had on the cultivation of bananas over the years.

Bananas would exist without humans but in their natural form. The yellow banana as we know it today is a blend of two species of wild bananas. These are the Musa Acuminata, a type of dessert banana, and the Musa Balisiana, or plantain. The two species were initially blended together some 10,000 years ago. However, they were originally very foul and bitter in taste.

1. What Were the Original Bananas?

Firstly, I will say that bananas would definitely exist without humans.

However, this would be in their natural form, which is not something that many of us have ever seen.

Bananas, as we know them today, are actually a blend of two wild varieties.

These are the Musa Acuminata, which is a type of dessert banana that originates from South-East Asia.

And then we have the Musa Balisiana, which is commonly known as the plantain.

With that being said, prior to these two species being blended some 10,000 years ago, they both were extremely foul and bitter tasting.

So, the original varieties of bananas would definitely not be something that you’d typically enjoy at the breakfast table.

Both wild species of bananas would have had green skin, been much smaller in size than we’re used to, and contained seeds inside.

But the bananas that we know and love nowadays are completely man-made.

2. What Are the Origins of the Human Cultivation of Bananas?

You’ll typically hear many conflicting stories about the origins of bananas.

However, there has been a strong focus on the Kuk Valley of New Guinea at around 8,000 BC as being the place where humans originally cultivated bananas.

Archaeologists agree that the Kuk Valley is the first known place for banana domestication.

With that being said, there are also stories of bananas first being cultivated in South-East Asia and throughout the South Pacific.

But, further banana cultivation and domestication didn’t come into existence until around 2,000 years ago.

Banana consumption has been written about in various historic Greek, Arab, and Latin writings.

Alexander the Great is said to have first come across bananas during a visit to India.

However, bananas weren’t brought to the West until 327 BC by Arab conquerors.

Bananas then moved from Asia to Africa.

They finally made their way to the “New World” from the Canary Islands shortly after America was discovered.

It is said that their journey to the West was helped by explorers and missionaries to the Caribbean.

Soon after, in 1834, mass production of bananas started, although this exploded in the late 1880s.

3. What Is the Story of United Fruit Company Bananas?

A prime example of how bananas have been “humanized” is the story of the United Fruit Company.

The United Fruit Company paid Guatemala’s government for land, which would be used for a vast empire of banana plantations.

This started in 1950 and included the building of the first-ever railway system in Guatemala.

However, the railways were pretty much useless for people, but extremely useful when it came to exporting bananas to mainland USA.

Through years of trial and error, the United Fruit Company managed to figure out how to do one thing extremely well, and that was to grow one variety of bananas.

The United Fruit Company produced the Gros Michel banana, domesticated it, and then learned how to reproduce it.

In effect, they had created bananas that were genetically identical to each other.

Basically, they had produced a “predictable” banana.

The bananas made by the United Fruit Company were typically always the right size and the right flavor.

So, as you can see, bananas would exist without humans.

However, this would be in their natural form, which would mean all bananas would be green, small, and contain seeds.

Humans cultivated two varieties of wild bananas to produce the yellow banana that we know and love nowadays.

So, in effect, all bananas that we consume in the modern day and age are completely man-made.

One other fascinating fact to think about is that bananas are always picked at night, so let’s find out why.