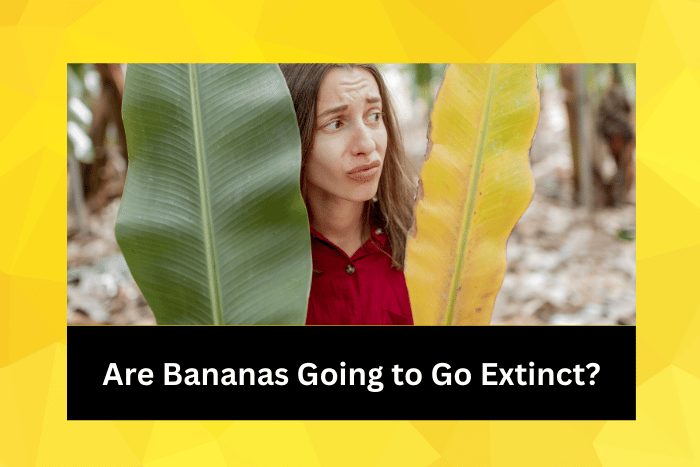 Given the number of plantations throughout the world, it seems unlikely, but are bananas going to go extinct?

After all, it is the most popular fruit globally, and millions are consumed every day.

But, of course, unforeseen events can happen at any time.

Imagine if a disease wiped out all the banana plants!

Bananas are typically grown in tropical countries, so a natural disaster is always a possibility.

So, let’s find out if bananas are going to go the way of the dinosaurs!

There is a possibility that bananas could become extinct in the near future. Nearly all the bananas grown for commercial use are the single variety known as the Cavendish. And this particular species is susceptible to a devastating fungus called Panama Disease or Tropical Race 4. The problem is exacerbated by the fact that all Cavendish bananas are, in effect, clones of each other, with the same vulnerability to disease. The fungus is already prevalent in Southeast Asia and Latin America, with the potential to destroy 75% of the world’s banana plants. Serious intervention is required to stop bananas from becoming extinct.

Why Are Bananas Likely to Become Extinct?

To be honest, it’s quite surprising to learn that there is a real possibility of bananas becoming extinct through disease in the near future.

It’s a $25 billion dollar industry, so it’s not as though there is a shortage of funds for research.

The problem lies in the fact that 99% of the world’s commercially grown bananas are the same variety, the Cavendish.

As they don’t produce seeds, they are all actually clones of one single banana.

This makes them particularly susceptible to disease.

There is a particular fungus called Panama Disease or Tropical Race 4 that is deadly for bananas.

It is believed to have originated in Southeast Asia in the early 1990s and has since spread to Latin America.

That means over 75% of the world’s population of banana plants is at risk.

The symptoms of the disease include the stem becoming split and the banana plant leaves turning yellow.

Once a plant is identified as being infected, then it’s not as simple as just removing that one tree.

The fungus can be present up to 10 feet below the soil’s surface.

As banana plants have extensive root maps, the disease can spread quickly.

Can Banana Plants Be Protected from Disease?

With Panama Disease becoming a real threat, commercial growers will have to implement some changes to stop it in its tracks.

One measure is to introduce biosecurity, in effect, locking down the plantations.

This requires vehicles to be disinfected to remove traces of soil and workers to wear rubber boots, worn only on the plantation.

The fungus thrives in soil, and that is why it is so important to have as little contact with it as possible.

Just one infected banana plant may require an entire plantation to be destroyed to prevent further spread.

This is achieved by injecting herbicides into the soil.

The whole area will then need to be covered to stop birds from landing on the soil and carrying the fungus elsewhere.

One extreme but perhaps necessary measure is to build concrete paths within the plantations to avoid having to walk on infected soil.

Sanitizing foot baths can also be employed, and ammonia is particularly effective.

It is hoped that these modern methods of containing the disease actually work.

It is not the first time that bananas have been at risk.

Prior to the introduction of the Cavendish variety, the Gros Michel was the most popular banana.

In the 1950s, the Panama Disease took hold and wiped out the entire production of this fruit.

Further research is continuing, including the use of genetic modification, but this is not a popular option.

It remains to be seen whether our favorite fruit will indeed become extinct.

Why Are Bananas Going Extinct?

There is a genuine possibility that bananas will become extinct.

As the majority of bananas are cloned and of one variety, they are susceptible to disease.

Biosecurity measures will need to be put in place to halt the deadly fungus known as Panama disease.

Genetic modification may be the answer, but further research is required.

You don’t need to panic buy bananas just yet, but it’s a sobering thought that perhaps our descendants will not get to taste a fresh banana!

Imagine if you had no lovely yellow fruit for your loaf; what else can you make banana bread from?