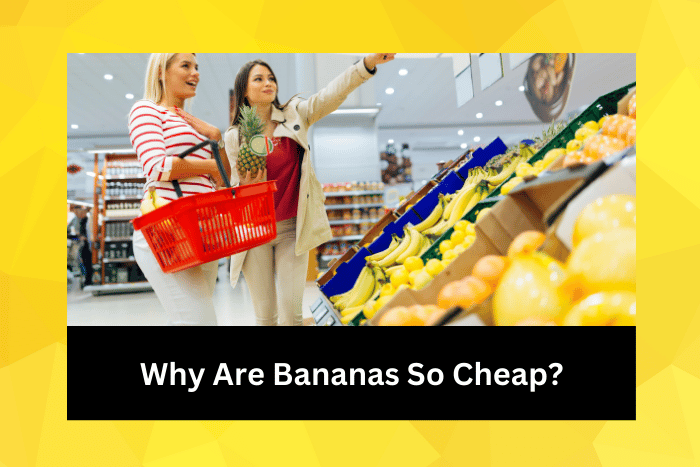 You might not think of it as a problem, but have you ever wondered why bananas are so cheap?

After all, when you think about it, there must be a lot of costs involved with growth, harvesting, and transportation.

Most of the plantations are in the Caribbean and South America, so shipping costs must be astronomical.

And then there is the cost of labor and maintaining the banana plants.

Let’s have a look at how the producers can sell bananas at such a low cost.

Bananas are the most consumed fruit throughout the world and are surprisingly cheap to grow, harvest and transport. The main reason for this is that the majority of commercially grown bananas are of the Cavendish variety. Each banana is a clone, and therefore they all look and weigh approximately the same. They don’t need to be sorted prior to shipping and are quick to pick and pack. This cuts down on labor costs. Unfortunately, there is also an element of underpaying the farmers on the plantations. Supermarkets also use bananas as loss leaders to tempt people into their stores and purchase other items.

Are Cheap Bananas a Problem?

Bananas are incredibly cheap, and in fact, their cost has been dropping year after year.

This may seem like good news to the consumer, but is it a problem?

Somebody must be making a profit; otherwise, trading in bananas would be a pointless exercise.

The actual growing of bananas is a very simple process.

Nearly all bananas grown for commercial purposes are of the Cavendish variety.

Each banana is essentially a clone and doesn’t require expensive pollination.

They are all approximately the same weight and size and look alike.

There are no labor costs involved in having to sort the fruit after harvesting, as all the bananas will be the same.

The bananas grow in huge bunches and are quick to harvest.

Unfortunately, the dark side of the banana trade lies in the fact that many farmers are underpaid and barely receive a living wage.

In part, this is the fault of the supermarkets, which use bananas as a loss leader.

The stores offer the fruit at a very low price to get customers through the door.

This means they need to purchase them from the supplier at such a low price that it is impossible to pay the farmers the rate they deserve.

Why Is There a Rise in Fairtrade Bananas?

The knowledge that farmers and growers were not receiving a decent wage led to the Fairtrade organization.

It is not possible to produce such cheap fruit without somebody in the supply chain getting a bad deal.

According to the World Bank, banana farmers can be paid as little as $2 per day.

And child labor can be prevalent on banana plantations.

Fairtrade was established to ensure that employees worldwide receive a living wage that represents the hard work they have to do.

This is particularly relevant to the banana industry, and safer working conditions are also a concern on the plantations.

Currently, over 28,000 banana farmers and suppliers follow the Fairtrade standards.

Fairtrade bananas are instantly recognizable, and it goes without saying that they are more expensive.

It is up to the consumer to decide if they are happy purchasing cheaper bananas or prefer to show their support for the Fairtrade option.

The Dark History of Bananas

Bananas are the cheapest fruit for many reasons.

In particular, as each banana is a clone, they all look and weigh the same, making them easier to pick and pack.

No additional sorting is required.

Pollination is not necessary, further cutting down on costs.

Unfortunately, some farmers and growers are paid a very low wage, as suppliers cannot afford high wages and still make a profit.

Fairtrade bananas are a way of identifying that the fruit is grown in an ethical way with fair pay.

It’s up to you if you want to purchase the cheaper bananas.

If you are interested in learning more, find out where the United States gets most of its bananas from.