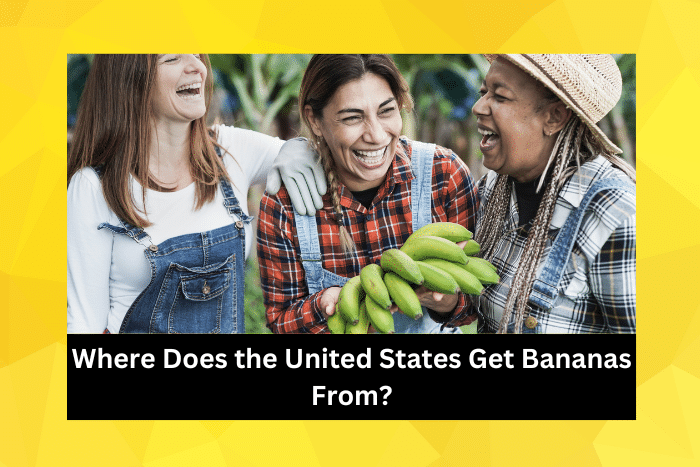 There is no doubt that they are a popular fruit, but have you ever wondered where the United States gets bananas from?

They seem to be available all year round, so is it just one specific country that produces them?

Are bananas seasonal products, and thus, a variety of suppliers worldwide are required?

Are there any American bananas?

Just how many bananas are actually shipped to the US?

Let’s find out the facts!

The United States gets the majority of its bananas from five countries: Colombia, Costa Rica, Ecuador, Guatemala, and Honduras. Of these, Guatemala is the most prolific supplier, importing over $3 billion worth of bananas to the US every year. Bananas have been traded internationally since the 14th century. There are relatively few banana producers based in the US, and the majority are located in Hawaii and Florida. India is the largest grower of bananas but rarely exports them, they are produced for the domestic market. The banana industry is dominated by three companies: Chiquita, Del Monte, and Dole.

Does the United States Import All Its Bananas?

Bananas are available year-round, and given that they require tropical conditions to grow, is it safe to assume they are all imported?

You may be surprised to know that bananas have been traded on the international market since the 14th century.

Now, the banana industry is huge and is primarily controlled by three multinational companies: Del Monte, Dole, and Chiquita.

Chiquita alone employs more than 25,000 employees and exports its bananas to more than 70 countries, including the US.

Surprisingly, despite having plantations in Panama, Columbia, and Guatemala, they actually buy approximately 70 percent of their stock from independent producers.

You will no doubt be familiar with the blue sticker of the Chiquita brand.

However, when you buy your bananas, there is no way of knowing where they have been imported from.

The most likely country will be Guatemala, which is the largest supplier of bananas to the US.

In one year alone, they import over $3 billion of bananas.

The other main suppliers are Ecuador, Columbia, Costa Rica, and Honduras.

Bananas are not seasonal in these countries, they are grown year-round.

Over 130 countries actually grow bananas on a commercial basis, but many such as India, sell them only to the domestic market.

The United States is currently the world’s largest importer of bananas.

Does the United States Have Any Banana Plantations?

Knowing how popular bananas are, it would make sense for the US to have its own plantations and cater to the domestic market.

But maybe, that’s not possible, as a tropical environment is required.

You will be surprised to know that there are some banana plantations in the US.

And in fact, the United States is the 13th largest banana exporter in the world.

The main destinations that are exported to are Canada, Bermuda, and the Bahamas.

Seems pretty crazy, really, exporting US bananas elsewhere and then shipping them in from other countries!

But of course, it’s all a question of economics, which I won’t be exploring any further here.

Right, back to the main question!

Hawaii is currently the largest producer of bananas, followed by Florida.

However, Hawaii typically only caters to the local markets, specializing in the Hawaiian apple banana.

The cost of labor and land in Hawaii make it too expensive to produce bananas on a large scale for the export market.

The state of Florida does export its fruit and is actually known for growing Thai bananas, which are similar to plantains and need to be cooked before consumption.

The Journey of Bananas

The United States gets the majority of its bananas from Guatemala.

The US does have its own banana plantations, primarily in Hawaii and Florida.

American bananas are exported to Canada, Bermuda, and the Bahamas.

So, now you know where your bananas come from!

Having mentioned the big brands earlier, have a read about the difference between Chiquita and Dole bananas.

1 thought on “Where Does the United States Get Bananas From? (Answered!)”