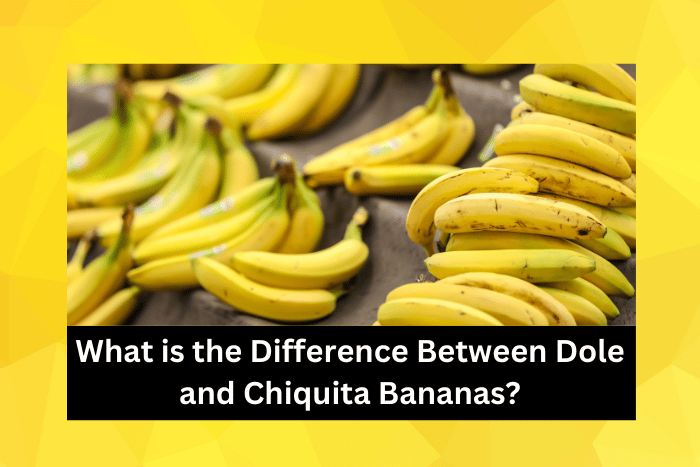 Have you ever wondered what is the difference between Dole and Chiquita bananas?

After all, a banana is a banana, does it matter which company it has come from?

Is either of them an organic producer?

Do they taste the same?

What other companies import bananas?

Shall we find out the truth about Dole and Chiquita? Follow me!

The two companies of Dole and Chiquita grow different cultivars of bananas. Although they both use the standard Cavendish banana, Chiquita grows the more specific Grand Nain variety. Whether they have any discernible difference in flavor is down to an individual’s taste buds. As all Cavendish bananas are genetically identical, the only difference between different brands would be in their method of storage and transport. Chiquita Brands International has recently acquired the Fyffes company, making it the biggest importer of bananas in the world.

Can You Tell the Difference Between Dole and Chiquita Bananas?

Dole and Chiquita are two of the biggest banana producers and importers in the world.

And in fact, Chiquita Brands International has recently acquired the Irish company Fyffes.

Along with Del Monte, they control 40% of the banana trade.

However, it’s unlikely that most people can even tell the difference between the two top brands of bananas.

Both producers use the standard, commercial strain of banana known as the Cavendish.

However, Chiquita grows a specific variety of it known as Grand Nain.

These are said to be slightly larger than Dole bananas

It is rumored that Chiquita has genetically modified their bananas, but there is no substantial evidence of this.

And in fact, all Cavendish bananas are genetically identical.

In effect, they are all clones.

The only factors that could make a difference to the taste are the weather and the composition of the soil.

Bananas are actually grown in over 150 countries, predominantly in Latin America.

43 million tons of bananas are sold worldwide every year.

No wonder it’s the most popular fruit in the world!

Should You Buy Fair Trade Bananas?

Although Dole and Chiquita are the two biggest brands when it comes to bananas, there are a lot of smaller producers.

Many of the smaller companies are fair trade, so should you be buying your bananas from them, rather than international conglomerates?

Let’s take a look at what fair trade actually means.

In effect, fair trade is when products are sourced directly from small-scale farmers, and they are given a fair price that covers all their costs.

At the heart of it is treating the farmers with dignity, equality, and fairness.

You may be interested to know that the very first fair-trade banana was sold in the year 2000.

Approximately one in three bananas now carry the fair-trade mark.

So, if this is your preference, you should have no difficulty in finding fair-trade bananas.

Of course, you may have to pay a little more than usual.

But the extra will go to the farmers rather than a multi-million dollar big brand company.

How Chiquita Bananas Are Grown

There is actually very little difference between Dole and Chiquita bananas.

Chiquita predominantly grows the Grand Nain variety but this has a similar taste.

The Chiquita bananas may be slightly larger.

If you prefer not to purchase big-name brands, you can consider fair trade bananas.

Then, you are assured that the farmers receive a fair price for their products.

At the end of the day, a banana is just a banana as regards the way it tastes!

But why exactly are bananas sold so cheaply?

3 thoughts on “What is the Difference Between Dole and Chiquita Bananas? (2 Big Banana Brand Facts)”