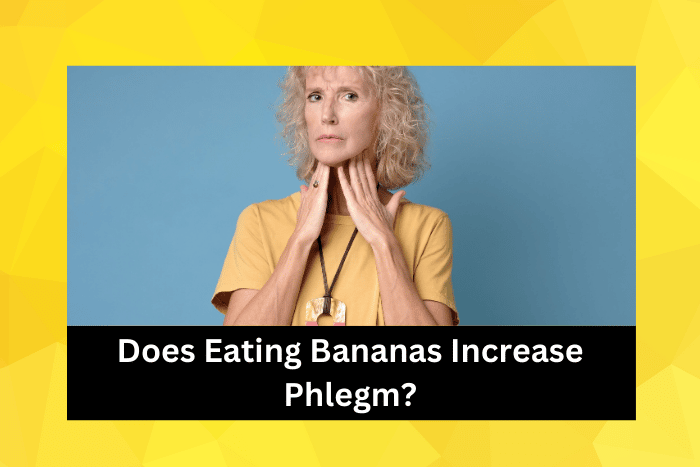 Perhaps, you appear to be suffering from excess mucus and phlegm production.

And unfortunately, the only culprit appears to be the beloved yellow fruit.

We all know that bananas are generally healthy, nutritious, and taste wonderful.

However, that’s not to say that they don’t cause potential health issues in some individuals.

So, please allow me to explain what you need to know about eating bananas and potential phlegm formation.

Bananas will not specifically cause phlegm in most individuals. However, they are rich in histamines. So, eating bananas can trigger the body to release histamines, which in turn can create phlegm and mucus. However, this typically only occurs if you have an intolerance or sensitivity to histamine. Furthermore, if you find that eating bananas do cause excessive phlegm, it may be a sign that you’re allergic. It’s also best to avoid bananas when you have a cold or flu, as this may automatically increase mucus production.

Firstly, I think it’s important to state that eating bananas will not cause phlegm in the vast majority of individuals.

So, if this is something that you’ve experienced, then there is probably something untoward.

The first factor to consider is that bananas are high in histamines.

Just in case you weren’t aware, histamines are chemicals made naturally by the body.

Their main role is to rid the body of allergens.

However, as you rid the body of these allergens you’ll typically itch, sneeze, or do whatever else it takes to fire up the body’s defense system.

So, in effect, a food rich in histamines isn’t always a bad thing.

With that being said, whenever you eat bananas, as they’re histamine-rich, they will trigger the release of histamines inside the body.

This isn’t a cause for concern for the vast majority of us.

However, if you happen to have a low tolerance level or are sensitive to histamines, then this can be a huge issue.

In fact, this could be the very reason that bananas cause you phlegm or excessive mucus.

As I’ve mentioned, this isn’t strictly the case for most individuals, but it could cause problems for some.

2. Are You Allergic to Bananas?

Something else to consider is that you’re allergic to bananas.

I’ll admit it’s difficult to determine whether you’re allergic to specific foods, but there can often be some tell-tale signs.

So, if you find that you are producing phlegm whenever you eat bananas then this may point to an allergy.

Trust me, it’s not unheard of, and there are many people who are allergic to bananas,

As I’ve alluded to, most people should not experience any difficulties when eating bananas.

However, if you happen to be someone who finds that they produce excessive mucus or phlegm whenever you eat a banana, this could be the sign that you’re looking for.

Unfortunately, there are many foods that we can potentially be allergic to.

And it won’t always be completely obvious.

That being said, if you find that you produce excessive mucus whenever you consume bananas, then this may be all the evidence you need.

I would advise that you keep a note of your reaction whenever you eat bananas and discuss this with your Doctor.

3. Should You Avoid Bananas If You Have a Cold or Flu?

Whether you have an allergy or not, I would recommend that you avoid eating bananas if you have a cold or the flu.

There’s no specific correlation between eating bananas and these events.

However, if you are bunged up with cold then you’re likely to be producing more phlegm anyway.

And unfortunately, regardless of whether you’re allergic or not, bananas are high in histamines, so they are likely to increase mucus production when you’re ill.

Therefore, it makes perfect sense to avoid eating bananas when you’re stuffy, sneezing, or producing mucus through being ill.

Once again, this has nothing to do with bananas themselves, it’s simply a case that eating bananas while you’re ill can produce an untoward reaction.

10 Foods You Should Never Eat When You’re Sick

So, as you can see, eating bananas in themselves doesn’t specifically cause phlegm.

However, just the fact that they are high in histamines may provoke this reaction.

Additionally, it could also be the case that you’re actually allergic to bananas.

And even if you’re not allergic, bananas are best avoided if you have a cold or the flu.

But if you are allergic, don’t you find it strange that you can eat plantains, but bananas cause a reaction?