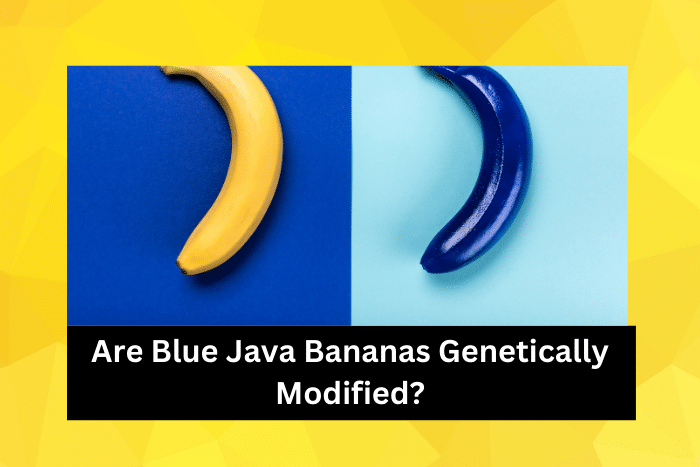 Looking at the weird color, you may wonder, are blue java bananas genetically modified?

After all, surely a banana should be bright yellow, the color we are all familiar with.

Is it just the peel, or is the fruit inside of a similar hue?

Does it put you off from eating it?

What about bananas in other colors, is that even possible?

Blue Java bananas are a natural phenomenon and are not genetically modified to produce their color. They are actually a hybrid variety of two species, Musa balbisiana and Musa acuminate. The blue color is only evident when the bananas are unripe. Once the ripening process begins, the peel turns pale yellow. The fruit is unaffected by the blue skin coloration and is the standard creamy white. This particular cultivar is also known as the Ice Cream banana, as the taste has a hint of vanilla. They are found predominantly in South East Asia. As they have a high tolerance to temperature changes, the Blue Java banana is a popular year-round ornamental plant.

Can You Eat Blue Bananas?

Although they may look pretty weird, you can actually eat blue bananas.

To give them their full name, they are called Blue Java bananas.

However, the blue color indicates that the fruit is not ripe.

So, you still need to wait until they turn pale yellow.

The flesh inside is the typical white color.

The taste is somewhat of a revelation, though, as it has a definite hint of vanilla.

This leads to them also being called the Ice Cream banana.

They are not genetically modified to create blue skin, but they are a hybrid of two different varieties, Musa balbisiana and Musa acuminate.

As they are mainly grown in South East Asia, they are not as easy to find in your supermarket.

However, they are definitely worth seeking out from smaller, independent importers for their unusual taste.

The Blue Java banana is tolerant of cold weather and can easily be grown in the US as an ornamental plant.

Do be aware that they can grow up to 20 ft, so make sure you have plenty of room!

It can take up to two years before they flower, followed by the production of blue bananas up to 150 days later.

Are There Any Other Colored Bananas?

Well, if blue bananas occur naturally, you would think there could be other colors.

And you’d be right!

In fact, bananas come in a variety of different colors, including black, orange, pink, purple, and red.

Red bananas have a very vivid color, have higher sugar content, and even the flesh is a pale pink.

They have a taste similar to mango and make an attractive addition to fruit salads.

Orange bananas are known as Karat and are unusual in that they are not curved.

They are quite small, with orange-colored flesh and a hint of strawberry flavor when cooked.

Unfortunately, many of the colored varieties of bananas are prone to disease and do not cope well with transportation.

They are not commercially viable, so you are unlikely to find any outside of the countries they are grown in.

Why Are Most Bananas Yellow?

So, with all these fancy colors, why are the majority of bananas yellow?

As you are aware, when a banana first appears on the plant, it is green in color.

It only turns yellow as it ripens.

The green color is a result of chlorophyll present in the plant.

Chlorophyll is necessary to ensure the banana plant has the required amount of sunlight and nutrients.

As the banana ripens, the amount of chlorophyll reduces, thus turning the skin yellow.

I suppose you might also ask, why is the fruit inside the banana white?

And that is simply due to the fact that they contain no chemicals that cause a color change.

Although red bananas do contain carotene, which is why their fruit is slightly pink.

Blue Java bananas are not genetically modified to produce their color.

The shade of blue signifies that they are not ripe.

The flesh inside will be the standard white color and has a taste similar to ice cream.

Other varieties of bananas are available in different colors, such as red or orange.

The typical banana starts off green but turns yellow as the chlorophyll is lost.

No matter what color your banana is, it is still a delicious, satisfying fruity snack!

But why are bananas yellow anyway?