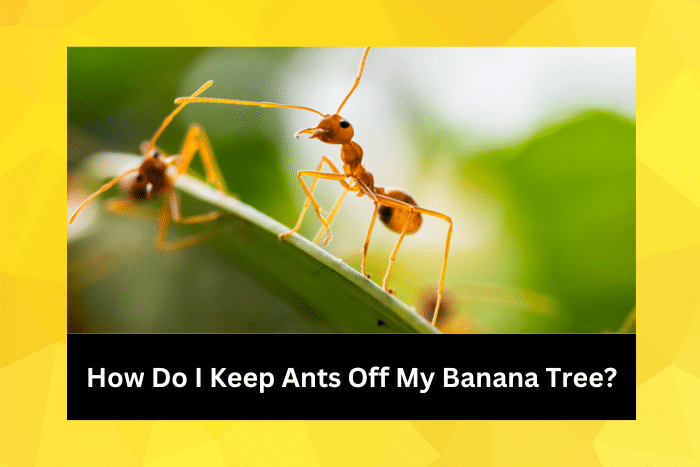 It has to be one of the most frustrating sights, but how do I keep ants off my banana tree?

What exactly are the ants doing there?

Will they damage your banana tree?

And, of course, how do you get rid of them?

I’ll now answer these and other questions about keeping ants off your banana tree.

Ants aren’t actually that big a deal around your banana tree, although banana aphids can certainly cause a problem. However, in order to keep ants off your banana tree, you will need to kill them. One of the best ways to do this is to form a paste from cornmeal and borax. Ants are automatically attracted to cornmeal, and the poison in borax will kill them off.

1. What Is the Ants and Aphids Conundrum?

To be honest, it’s not so much the ants that you want to worry about.

Granted, ants will always be attracted to your banana tree, but they won’t typically cause any damage.

In fact, there are at least a couple of reasons why it’s not so bad to have your banana tree literally infested with ants.

Firstly, as bad as it may look, ants will typically create tunnels, which actually allows for better aeration of the soil.

This, in turn, is great news for your banana tree.

Secondly, ants will typically marshall and control banana aphids, who are the real problem.

Plus, they can actually spread disease to banana trees in three distinct ways:

They will feed on the sap of banana trees, thus taking essential nutrients and water.

Banana aphids can typically be controlled by soapy water, insecticides, and horticultural oil.

So, while you may wish to keep ants off your banana tree, it’s worthwhile remembering that ants themselves won’t actually cause any damage.

Plus, they can actually help to control a potential invasion of banana aphids.

2. What Are Some Homemade Banana Tree Ant Deterrents?

Okay, so we’ve clarified that ants aren’t really that big of a problem.

That being said, they are unsightly, and even though they won’t feed on the fruit or harm the tree itself, it’s probably best to completely remove them from the equation.

Basically, it makes sense to keep your banana tree and the surrounding area as insect-free as possible.

The first solution is to use cornmeal.

Now, cornmeal itself won’t actually kill or rid you of your ants.

However, ants will be immediately attracted to cornmeal.

So, you actually need to mix some type of poison with the cornmeal.

A popular combination is cornmeal and borax.

But, depending on where you live in the world, you may not have access to borax.

As an example, Borax has been banned in the UK and the EU for a number of years.

Borax, or to give it its chemical name, Sodium Tetraborate, is a naturally occurring mineral compound.

Plus, it is already in many household products, and it is typically used as a water softener or laundry booster.

Furthermore, borax can also be used as a multi-purpose household cleaner.

You can mix one-part borax with nine-part cornmeal, which will then produce a paste.

You should then place the paste near the ant trail and allow the ants a few days to take the mixture back to their ant colony.

The actual process of killing the ants will take at least a week, possibly two, but you should soon notice the ant population significantly decreasing.

Another great option is cinnamon or cinnamon oil.

Basically, if an ant inhales cinnamon, it will suffocate and die.

So, you simply want to sprinkle cinnamon around the ant trails and paths or an anthill opening and then sit back and let it do its job.

You can mix approximately 20 drops of peppermint oil with two cups of water.

Then place the mixture into a spray bottle.

Once more, spray the solution around ant trails and paths, and then let it do its job.

As I’ve mentioned, ants can be more of an annoyance than an actual danger to your banana tree.

However, I completely understand your desire to get rid of them.

So, I hope you understand that ants aren’t actually that much of a problem.

In fact, it’s banana aphids that you should worry more about.

That being said, no one particularly wants a huge colony of ants infesting their banana tree.

The best way to get rid of them is by using a mixture of cornmeal and borax, which will create a paste.

You should then spread this around the ant trails near your tree.

The cornmeal will attract the ants, whereas the borax will kill them off.

You can also use cinnamon or peppermint essential oil to produce the same results.

And if you are worried about other creatures, find out if snakes are attracted to banana plants.