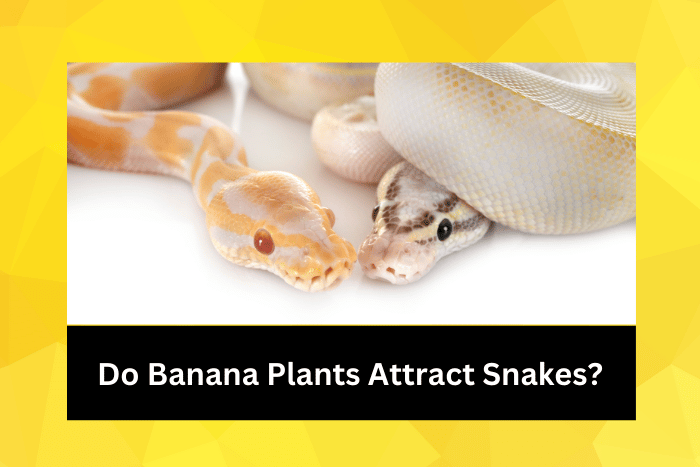 Whether you love or loathe these reptiles, perhaps you have often wondered, do banana plants attract snakes?

After all, bananas usually grow in exotic, tropical climates, where snakes are abundant.

Is there anything special about banana plants that snakes particularly like?

Perhaps they are attracted by smell or taste.

Or maybe they like to shelter under the massive leaves.

It could be the opposite, and snakes actually hate banana plants.

Let’s slither away together and find out the truth.

Snakes are not particularly attracted to banana plants. A banana plant is not a tree; it is a herb and therefore does not have the kind of wooden structure that snakes may prefer to live in. There is a possibility that a snake may hide in any fallen banana plant leaves when hunting, but this is a rare occurrence. They are not attracted to the smell or taste of bananas because snakes do not eat any kind of fruit. The Banana Ball python is so named because of its yellow color rather than its liking for the fruit.

The main reason why snakes are not attracted to banana plants is that they prefer a wooden structure such as a tree.

Although a banana plant has a strong, fibrous stem, it is not a tree it is a herb.

Snakes would typically climb a tree to escape from predators on the ground, and they actually have few enemies in a banana plantation.

You may think that snakes would like to hide among any fallen banana plant leaves if they are hunting.

This may only be a problem if you have a lot of rodents near your banana tree.

However, it is said that snakes do not like the texture of dead leaves.

Fortunately, hiding among the leaves rarely happens, so do not be discouraged about using dead banana leaves as mulch around your plant.

Snakes do not eat any kind of fruit and would not be attracted to a banana plant as a source of food.

Perhaps you are wondering how the Banana Ball python gets its name if it doesn’t like the fruit.

The simple answer is that it’s due to its striking yellow color, resembling that of the banana.

It even has brown spots, again, a typical coloration of a banana.

So, if snakes are not attracted to banana plants, what about other reptiles?

Are there any other creatures that you could expect to see lurking around your banana plants?

Of course, this depends on where you live and whether the species are native to you.

Most reptiles are carnivorous and don’t naturally eat fruit.

So, the only reason to see reptiles near your banana tree is if they are hunting the creatures that are attracted to the fruit, such as rats or mice.

However, some reptiles are vegetarian and may be interested in consuming any bananas that may fall to the ground.

In fact, they are one of the few creatures that will also eat the banana peel to gain the most of its nutritious benefits.

Tortoises also have an attraction to the fruit, so much so that they may become addicted!

Check out the article linked at the bottom of the page to read more on this subject.

Turtles, skinks, and geckos also enjoy fruit and vegetables but are less likely to venture near human habitats.

Are There Plants That Attract Snakes?

Snakes are not attracted to banana plants, as they prefer to reside in trees.

It’s possible that you could find a snake hiding in dead banana leaves, but this is unlikely.

Snakes don’t eat fruit and are not interested in consuming bananas.

Other reptiles are vegetarians or herbivores and may enjoy bananas.

I guess that whether you like these answers depends on if you were hoping to attract or avoid snakes!

Here’s the article I promised you earlier if you were thinking of feeding a banana to your tortoise.