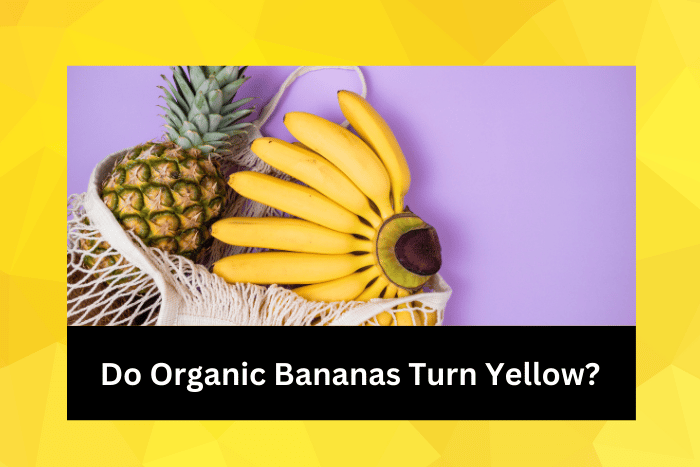 I’m sure I’m not the only one to wonder, do organic bananas turn yellow?

There are various reasons that you may choose to go organic.

However, it often feels like you’re waiting forever for your bananas to transform from green.

In fact, in some cases, it may never happen.

So, this leads you to speculate whether organic bananas ever turn yellow.

Allow me to explain the non-yellow turning phenomenon.

Organic bananas are treated differently from conventional fruit, so in some cases, they may never turn yellow. However, this doesn’t mean that they won’t be soft and sweet inside. An organic banana is unlikely to turn the bright, sunny, yellow color you’ll typically see with non-organic bananas. This is mainly because they aren’t treated with synthetically produced ethylene gas in order to speed up the ripening process. Furthermore, if an organic banana is picked too early, it will usually remain green throughout its life.

1. Why No Ethylene Gas for Organic Bananas?

One of the main reasons that organic bananas may not turn yellow is that they aren’t treated with various insecticides and fungicides.

Hence, the reason they are organic.

Non-organic bananas are generally treated with ethylene gas in order to speed up the ripening process.

Furthermore, this is what gives the non-organic variety that bright, sunny, yellow color.

So, in truth, an organic banana will probably never be as bright yellow as those treated with ethylene gas.

Admittedly, all bananas, including organic, will emit ethylene gas themselves, as this is part of the ripening process.

However, the very fact that organic bananas are allowed to grow completely naturally will mean that they’ll always have a greenish tinge to them.

Furthermore, there are varieties of bananas that never actually turn green.

A prime example of this is the Musa Ebun Musak banana which will typically turn a lighter shade of green once ripe.

With that being said, you can rest assured that the bananas are sweet and soft on the inside.

2. Was the Banana Picked Too Early?

Something else to consider is whether your organic bananas were picked too early.

Admittedly, this isn’t something that happens too often, as the banana trade is such a huge, multinational business.

However, it can still happen.

Bananas, whether organic or otherwise, will always be picked while they’re still green.

Basically, they need to go through a “reactivation” process, which can take anywhere up to a few weeks.

So, from a banana being plucked to actually appearing on the shelves at the store takes a lot longer than you would imagine.

The bananas will usually take from 6-12 days to get to their country of destination, but they will still need to go through a certain ripening process for a few days.

It’s only once this is completed that they are transported to stores.

With that being said, if an organic banana is picked slightly too early, then the likelihood is that it will never turn yellow.

Once again, this doesn’t mean the banana is inedible or that it won’t be sweet.

It simply means that you won’t get to see that lustrous yellow peel you’re used to.

How to Harvest a Banana Rack

3. Can You Force an Organic Banana to Turn Yellow?

You’ll often hear about speeding up the ripening process of bananas.

This can be achieved by placing bananas in a paper bag and therefore being naturally “treated” with the ethylene gas they emit.

However, it’s important to realize that this simply means that you are speeding up the ripening process and nothing more.

Therefore, your organic bananas may well be extremely ripe and sweet, but they still may not turn yellow.

It may happen, and then again, it may not.

The easiest way to check the ripeness of an organic banana that hasn’t turned yellow is to pinch it in between your fingers.

If they are soft to the touch, then they will be ripe and perfect for eating.

So, hopefully, you understand that organic bananas may turn yellow, although this isn’t guaranteed.

They will never turn the bright yellow you are used to seeing, as they aren’t treated with ethylene gas.

Then again, there are actually varieties of bananas, such as Musa Ebun Musak, which never turn yellow.

Furthermore, if your organic bananas were picked too early, they will generally remain green, even once ripe.

However, regardless of color, if your organic bananas are soft to the touch, then they will be ripe and sweet.

If you fancy a different shade of your favorite fruit, here’s how long it takes for red bananas to ripen.