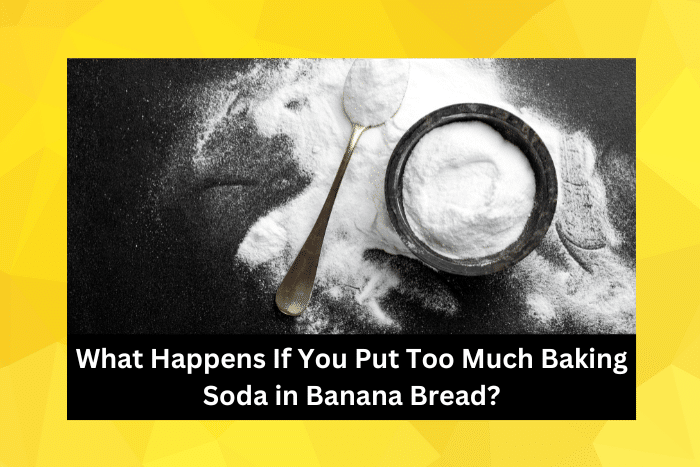 Perhaps you are worried about making this error and wondering, what happens if you put too much baking soda in banana bread?

Will it change the color or the texture of the bread?

Will you be able to taste the baking soda?

Can you correct the mistake of adding too much soda?

And how much baking soda do you need for banana bread, anyway?

Let’s reveal the answers to all your questions!

Adding too much baking soda to banana bread will primarily change the color of the loaf. This is because baking soda changes the PH levels of the banana bread batter, making it more alkaline. This causes excess browning both on the exterior and also the inside of the banana loaf. The banana bread will still be edible, but there may be a change in the taste and texture too. The loaf may bake unevenly, with some parts being denser than others, and the flavor will be less sweet and not to everybody’s preference. It’s possible to correct the error of too much baking soda before cooking by increasing the proportion of the other ingredients to compensate.

Will Too Much Baking Soda Ruin Banana Bread?

We all know that it’s all too easy to misread a recipe and get the measurements wrong.

Adding a tablespoon rather than a teaspoon, for example, is typical even among experienced cooks!

But what if you add too much baking soda to banana bread?

You don’t want your tasty treat to end up in the trash!

The first thing that is likely to happen is that it will brown a lot quicker.

This is because baking soda is an alkaline substance, and it changes the PH level of your banana bread batter.

Usually, this is a good thing; for example, when you want to quickly sear a steak, it changes the brown pigments of the meat.

But when you need a longer cooking time, such as with banana bread, you don’t want it to brown too quickly, and the mix is still raw in the middle.

The baking soda will also cause the inside of the bread to go brown as well, which may not be as attractive as you had hoped for.

Another problem with adding too much baking soda is that the banana bread might not rise evenly.

Some parts of the loaf could be flatter and denser in texture.

While other areas will be overly aerated and rise too quickly.

An uneven bake is not going to win you any competition!

Can You Correct Too Much Baking Soda in Banana Bread?

If you have ever put too much baking soda in a banana loaf, then you know how bad it can taste!

Whether or not you can save your bread depends on what stage it’s at.

Obviously, if it’s already cooked, then it’s too late.

If you have literally only just tipped the baking soda into the dry mix ingredients, then you could scoop it back out again.

The other option is to increase the proportions of the other ingredients, so they match.

Obviously, this will not be totally accurate, but it’s worth a try.

As a bonus, you will end up with two loaves!

As described earlier, it’s the fact that baking powder is alkaline that causes the problems.

So, you might think that you could compensate for that by increasing the acid levels.

It’s possible to add a small amount of lemon juice, which is acidic, to try and neutralize the effects of the baking soda.

But then you need to reduce the amount of any other liquid to compensate.

So, in effect, it is a whole new recipe, and the proportions of the ingredients will not be balanced.

Do You Really Need Baking Powder for Banana Bread?

Too much baking soda in banana bread will cause the loaf to brown too quickly before it is properly cooked.

The inside of the bread will also be brown.

The taste will be unpleasant, and the banana loaf will not rise evenly.

It’s possible to correct the error by increasing the proportions of the other ingredients.

And while we are on the subject of baking, read my thoughts on banana bread without vanilla extract.