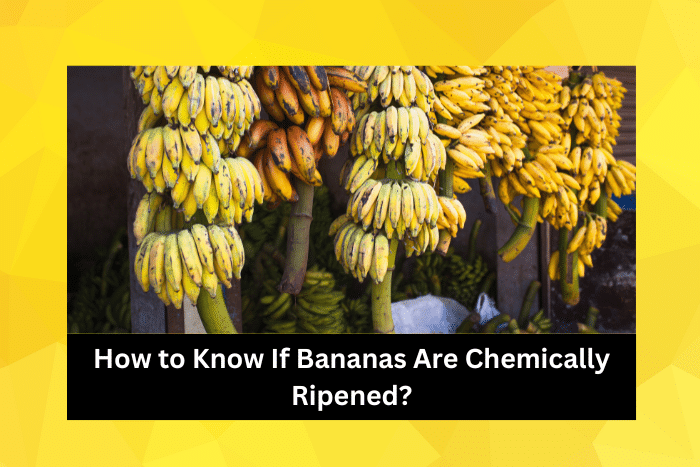 If you are concerned about your health or the environment, then you may wonder how to know if bananas are chemically ripened.

Do chemically ripened bananas look or taste any different?

What chemicals are used in the ripening process?

Can the chemicals be harmful?

Should you wash your bananas, just in case?

Is it better to buy organic bananas?

Well, it looks as if this is a controversial question, so let’s find out the facts.

Despite claims to the contrary, it is not possible to know if a banana has been chemically ripened. It will be no different in appearance or taste. The color of the banana or whether or not it has brown spots is not an indication of how it has been ripened. The artificial ripening process requires the use of ethylene, which is exactly the same gas produced naturally by the banana. It is likely that any commercially grown bananas will be chemically ripened, as they need to be shipped before being fully ripe. On arrival at their destination, the ripening process is initiated in temperature-controlled warehouses.

How Can You Tell If a Banana Has Been Chemically Ripened?

You may have seen lots of suggestions on the internet that show you different ways of knowing if a banana has been through a chemical ripening process.

To find out why let’s look at what actually happens.

The majority of bananas are imported from far-away destinations and may take quite some time before they finally arrive at the store.

If the growers sent fully ripe bananas overseas, then they would probably be overripe by the time they reached here.

So, typically, they are harvested when they are green and not quite ready for consumption.

Then, when the bananas reach the vendor, they need to be ripened before being placed for sale.

And, of course, time is money!

The merchant can’t hang around waiting for them to ripen, so he has to speed up the process.

The bananas will be stored in a temperature-controlled warehouse, and ethylene gas will be introduced.

Ethylene is what encourages the banana to ripen, so that’s the chemical that is used.

However, that’s exactly the same gas that the bananas themselves produce.

So, in effect, nothing different is happening from what occurs in nature.

No unusual chemicals are being used, so the appearance and the taste of the banana are not affected.

And there is no need to wash them specifically for this reason, but of course, it is always recommended that fruit be washed before consumption.

What Are Some False Banana Chemical Ripening Facts?

Let’s have a look at some of the untrue facts that are circulating about chemically ripened bananas.

Most of them focus on how the banana looks.

For example, the presence of brown spots on the banana peel is supposed to be a visible sign of chemicals.

In fact, the spots occur naturally and are a sign that the banana is at the perfect point of ripeness.

Or they could show that the bananas were stored at too high a temperature, but the taste won’t be affected.

Another false rumor relates to the color of the banana stalk.

Bananas with green stalks are said to be chemically ripened, but it’s not true.

The green color means that the banana isn’t quite ripe yet.

And the opposite, when a banana stalk is black, is supposed to indicate a naturally ripened fruit.

But actually, the black stalk is more likely to be a form of rot or fungus, but it’s nothing to be worried about.

So, now you know, and if you see any false claims about bananas and chemical ripening, you can now correct them!

How to Ripen Bananas

It is not possible to tell if a banana has been chemically ripened.

It won’t look or taste any different.

The color of the banana stalk or whether the fruit has brown spots don’t indicate the presence of chemicals.

In fact, the majority of imported bananas will have been through the chemical ripening process.

The gas known as ethylene speeds up ripening and is produced naturally by the banana.

So you can safely enjoy your banana and not worry about chemical ripening.

And if you’re a fan of red bananas, how long do they take to ripen?