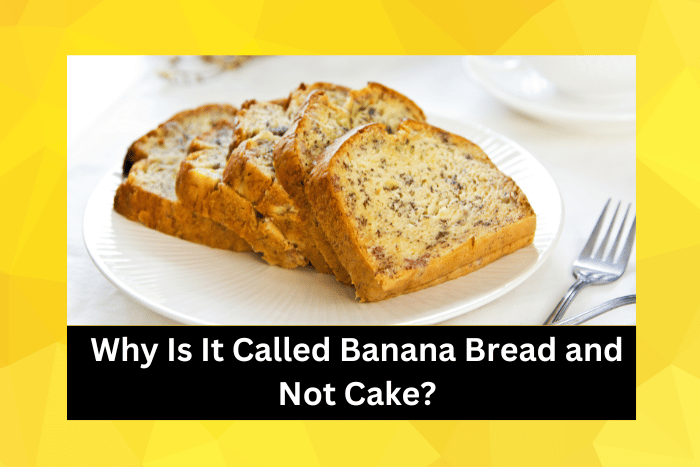 It’s a question we all want to be answered, why is it called banana bread and not cake?

In most cases, banana bread is light, moist, and sweet and is ideal for a cup of tea or as a dessert.

So, surely it’s time to start calling it a cake.

However, just to confuse matters, there also happens to be a dessert known as banana cake.

Is there a difference between the two, or is someone yanking your chain?

Banana bread is typically prepared with all-purpose flour, which makes it firmer, denser, and heavier, much like a traditional loaf of bread. However, banana cake is usually made with cake flour or pastry flour, giving it a softer and less dense texture. Banana cake is also generally sweeter than banana bread and will have an iced topping. With that being said, banana bread baking has changed over the years, so there is very little now to differentiate the two.

1. What’s the Difference Between Banana Bread and Cake?

If you ask me, someone’s trying to pull the wool over our eyes and convince us of something that isn’t so.

You’ll find various explanations of the difference between banana bread and banana cake.

However, I’m having none of it.

Firstly, you’ll be told that banana bread uses a thicker and denser flour, which gives it a texture more reminiscent of bread than cake.

Whereas banana cake incorporates softer and finer flour, such as cake flour or pastry flour.

And then you’ll also generally finish banana cake with an iced frosting.

But, in truth, the way banana bread is made has changed over the years.

In fact, most of us try to get a much finer, softer, and more moist texture.

So, there is absolutely nothing wrong with using cake flour to create banana bread.

Personally, I think that the additional frosting is just a disguise.

Basically, someone’s trying to fool us by disguising banana bread with a sweet and sticky topping, and then calling it a cake.

Well, if this were the case, surely the addition of yeast would make the cake a bread.

2. The Same Ingredients with a Different Name?

In my mind, forget everything that anyone tells you; they are essentially the same thing.

You are pretty much using the exact same ingredients, and if you wish to make your banana bread sweeter, then go ahead and be my guest.

One is cooked in a loaf tin, but if you want to call it cake, I see no problem with this.

The main ingredients of both banana entities include:

Plus, whatever additional ingredients you wish to enhance the taste.

Banana bread started off with the name “bread”; although it has morphed into a cake over time, the original name still remains.

3. What is the History of Banana Bread?

Banana bread really came to the fore in the 1930s.

This probably has much to do with the 1929 Wall Street Crash and the ensuing great depression throughout the 1930s.

People loathed throwing away any food, no matter how bad it got (including overripe bananas).

Then baking powder and baking soda began to be mass-produced during the 1930s.

And this inspired many cookbook writers to come up with recipes for bread and cakes.

It was from here that banana bread was born, and it is now a staple in many American households.

In fact, there is even a National Banana Bread Day, February 23rd, to be precise.

The way in which banana bread is made hasn’t changed a huge deal since the early days.

However, there is definitely a leaning towards making it sweeter, lighter, and more moister than ever before.

Hence, the confusion as to whether it’s bread or a cake.

The main reason it’s known as banana bread is that there is a separate recipe for banana cake.

However, the main ingredients are basically identical.

The only thing that differentiates the two is that banana cake will typically have sweeter ingredients, as well as an iced topping, while banana bread is baked in a loaf tin.

Additionally, banana cake should be made with either cake or pastry flour.

But, in truth, many of us have started to make banana bread with the finer flour.

Plus, banana bread is typically served as a dessert and can be made sweeter based on your preferences.

If you are interested in more banana dessert facts, here is the answer to where banoffee pie originates from.