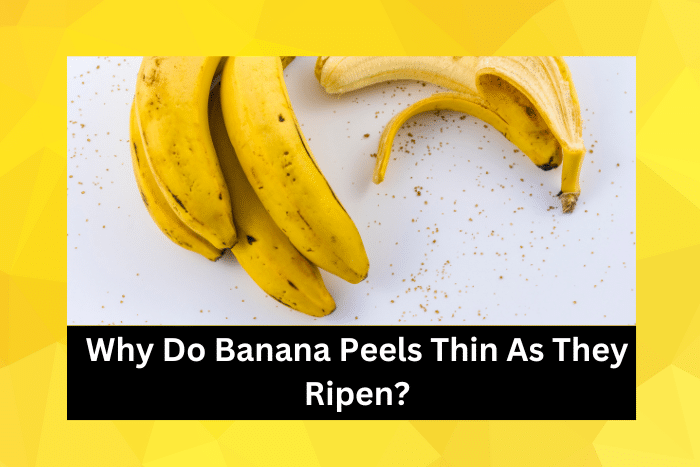 Just before you are about to eat your delicious fruit, have you ever wondered why do banana peels thin as they ripen?

Surely you must have noticed this.

When you first get your unripe bananas home from the store, they are pretty chunky with thick skin.

But when you come to eat them a couple of days later, their skin is much thinner.

So, why are the peels thinner on ripe bananas?

Where has the excess peel actually gone?

Let’s go in search of the answer to the mystery of the thinning peel.

Banana peels thin as they ripen due to a loss of water. Initially, when a banana is unripe, its skin is full of water, making it thicker. As the banana ripens, the peel loses the water through a process of osmosis, feeding the liquid into the fruit. The skin cells lose their plumpness as they start to wilt and will eventually collapse. This means the peel is much thinner and more pliable on a ripe banana. It is thought that animals who eat bananas will be able to peel them much easier when the fruit is ripe and needs its seeds dispersing.

1. How Long Do Bananas Take to Ripen?

So, as we have seen, banana peels thin as they ripen due to the process of osmosis.

But how long does it take to get to this stage?

And what else happens to the banana as it ripens?

Typically, when you buy your bananas, they will be green.

This is how the store likes to sell them so that they will ripen over time once you get them home.

If they were already ripe, then they would probably rot before you had a chance to use them.

Bananas can actually start to ripen in as little as 24 hours but can take up to five days.

The most obvious visual change will be in the color of the banana.

The green will gradually turn to that familiar shade of yellow that we all know.

As the ripening process continues, the peel will become thinner, and brown spots will appear.

At this point, you know that osmosis is taking place, the cells are wilting, and the banana skin is losing water to feed the fruit.

Eventually, the entire peel will turn brown and then black as it starts to rot.

2. What Can You Do with Banana Peel?

Having eaten your delicious banana, is there anything you can do with the peel?

It seems a shame to throw it away!

Actually, there are lots of uses for banana skins; let’s take a look at the most common and a few surprising ones!

Now, this will probably have never occurred to you, but the banana peel can be used to moisturize your feet!

Simply rub the inside of the banana skin on cracked heels or other dry areas, then rinse thoroughly.

Repeat every day for a week for sure soft, moisturized feet.

Did you know that banana skin can help soothe insect bites?

Banana peel contains polysaccharides, and this substance is useful for reducing inflammation and swelling.

Gently rub the banana skin across a mosquito bite or poison ivy rash for instant relief.

Now, this next tip isn’t guaranteed to work for everyone, but it’s worth a try if you have any unsightly warts.

Yes, banana peel is said to reduce the appearance of warts due to the enzymes in the fruit.

Tape a piece of banana skin over the wart, and change it morning and night for three weeks.

Your friends and family may not be impressed with your odd new accessory, but it’s worth a try!

The enzymes in the banana skin can also work wonders when it comes to splinters.

They are said to help encourage the splinter to rise nearer the surface to make for easier removal.

A mere 30 minutes with banana skin taped over the splinter is said to be effective.

You’ll Never Throw Away Banana Peels After Watching This

Now we know that a banana peel thins as it ripens, due to osmosis, the loss of water from its cells.

This ripening process can take up to five days, and the banana goes through several stages.

Once you have eaten the fruit, don’t throw the peel away, as it has several uses.

Bananas are not just delicious but useful too!

And while we are on the subject, what about throwing banana peels outside, is it acceptable?