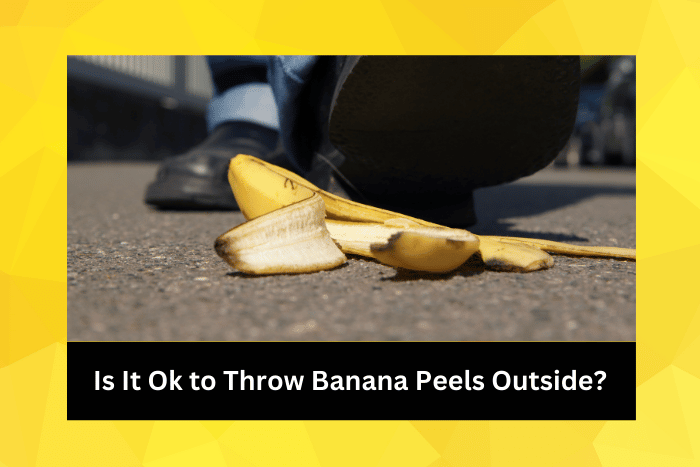 So, if you always put your waste in a garbage can, perhaps you have never wondered, is it ok to throw banana peels outside.

Why would you want to do that?

We’ve all seen slapstick movies or cartoons when somebody slips on a banana skin!

Surely it’s better to dispose of banana peels in a responsible manner?

But then again, they are a natural product, and presumably, they are biodegradable and leave no trace.

Let’s slip away and find out the truth about throwing banana peels outdoors!

Although banana peels are biodegradable, it is not recommended to throw them outside. It can take a full two years for a banana skin to entirely decompose. Wild animals may also be attracted to the peels, and this could upset the balance of nature, as such creatures may lose their fear of humans in pursuit of food. And, of course, it can encourage further littering if other people see that there are already banana skins on the ground and assume that it must be acceptable. Ideally, banana peels should be placed in a garbage can or a compost bin.

Bananas are, of course, a natural product, so you would expect them to decompose.

And it’s true there is a certain process that takes place that facilitates decomposition.

But you might be surprised to learn that it typically takes two years for a banana peel to decompose!

Imagine the situation if everybody threw their banana skins on the sidewalk or even in a natural setting.

The initial stage of decomposition starts with microorganisms through the use of enzyme secretion.

However, this takes a very long time.

Just think about how tough a banana peel is.

Next, insects join in the fun and start to use their mouths to help pull the banana skin apart.

The weather plays a part, and obviously, hot tropical climates will speed up the process.

But this doesn’t get away from the fact that for at least two years, the banana peels will be lying on the ground.

When other people see them, they will automatically assume it’s fine to repeat the behavior.

And before you know it, we would be inundated with mountains of banana skins!

And this, in turn, would attract wildlife keen to enjoy the sugar produced as the banana peels decay and rot.

How Do I Dispose of Banana Peels?

The best way to get rid of your banana skins is to put them in a compost bin.

This is undoubtedly better for the environment.

Compost bins are very affordable and easy to maintain.

You should initially half-fill the bin with leaves to start the process off.

Then, every time you have any fruit or vegetable waste, including banana peels, simply drop them in the bin.

To encourage faster decomposition, make a gap in the leaves, so the waste is in the middle of the bin.

Surprisingly, banana skins can decompose in a matter of weeks rather than years if placed in a compost bin.

As an added bonus, the compost bin will also produce a small amount of carbon dioxide, which is good for the environment.

The banana peels will also add potassium and phosphorus to your compost, which is necessary for plant growth.

It is not recommended to throw banana peels outside.

They take too long to decompose and can attract wildlife.

Putting your banana skins in a bin is the best idea.

They will decompose much quicker and will create compost that is good for your plants.

Eating bananas come with responsibility; who would have thought it?

While we are on the subject of the skin, here’s a guide on whether you can freeze bananas without peeling them.