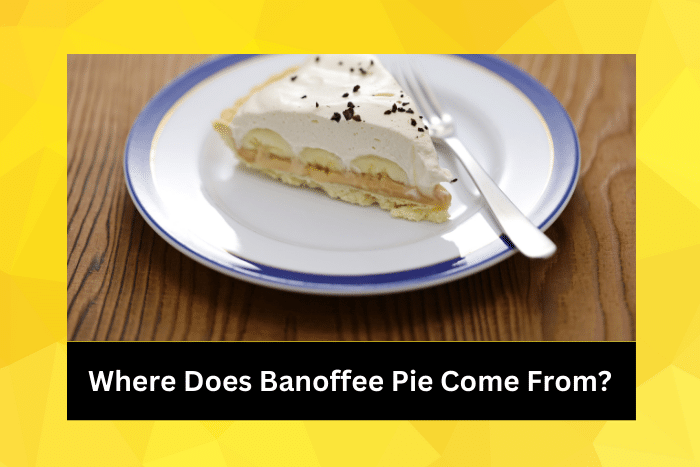 If this is your favorite dessert, you may have wondered, where does banoffee pie come from?

Who invented it, and where were they from?

Is banoffee pie American or English?

And what is banoffee anyway?

Is there a specific recipe, or are there any variations?

What are the main ingredients?

Are banoffi and banoffee the same thing?

Banoffee pie was initially created in 1971 by Nigel Mackenzie, owner of The Hungry Monk Restaurant in Jevington, UK. With the aid of his chef, Ian Dowding, they adapted an American recipe called Blum’s Coffee Toffee Pie by adding bananas. The dessert was originally spelled as banoffi but is more well known as banoffee, a combination of the words banana and toffee. It is typically made with a base of crumbled biscuits and butter, topped with a thick toffee sauce, cream, and bananas. The toffee sauce is made from boiled condensed milk but can be substituted with dulce de leche.

Is Banoffee Pie American or English?

You may perhaps have assumed that banoffee pie is American.

Nigel Mackenzie and Ian Dowding came up with the dessert at their restaurant, the Hungry Monk, in Jevington, UK.

Admittedly, it was an adaptation from an American recipe called Blum’s Coffee Toffee Pie.

Banoffee pie was a firm favorite at the restaurant for many years.

The Hungry Monk was initially just a small tearoom, and the original premises were genuinely occupied by an order of monks in the past!

Nigel and his wife Susan built up a successful eatery in the 16th-century building, but unfortunately, the restaurant was closed in 2012.

At the height of its fame, eager customers traveled from all over the UK to sample the famous banoffee pie, even phoning in advance to check that it was available!

The pie’s reputation was further enhanced when Nestle, the manufacturer of the key ingredient of condensed milk, put the recipe on the side of its tins.

There is still a blue plaque on the exterior wall of the building, denoting it as the birthplace of “Banoffi Pie.”

Note that the spelling is different, as the original dessert was called “Signor Banoffi’s Pie.”

However, the name banoffee was soon put into use and is an amalgamation of banana and toffee.

It even entered the Oxford English Dictionary in 1971!

What Are the Key Ingredients of Banoffee Pie?

Banoffee Pie looks quite spectacular, and you might assume it is difficult to make.

However, it is a simple recipe using only a few key ingredients.

Let’s start with the base, which should be light and crumbly, but still hold together to keep the filling inside.

The original English recipe calls for digestive biscuits, but in the US, it’s absolutely fine to use Graham crackers or shortbread.

The biscuits should be crushed and mixed with sugar and butter, with a pinch of salt.

Press the mixture into the pie tin and bake until golden brown.

Traditionally, a tin of condensed milk was boiled unopened, but this may be seen as a safety hazard, with the danger of it exploding!

A much safer option is to boil the condensed milk in a pan with butter and sugar, but it will reach very high temperatures, so do be careful.

The toffee layer needs to be spread on the biscuit base and left to cool.

I am sure you can guess the next step, and this is where the bananas come in!

Top the toffee with sliced bananas and quickly cover them with whipped cream to stop them from going brown.

For an extra touch of decadence, sprinkle chocolate shavings on your Banoffee Pie!

Are There Any Banoffee Pie Variations?

You don’t have to stick to the original, classic recipe, there are some variations to enjoy.

How about trying different fruit instead of bananas?

Strawberries add a delicious twist and go well with the toffee flavor.

Or use dried bananas or banana chips for a different texture.

Try using crumbled chocolate chip cookies for the base to increase the level of sweet indulgence.

You could even forget the base and spoon the toffee, bananas, and cream into a sundae glass for a super quick dessert!

If you are short on time, you can substitute ready-made dulce de leche for the toffee sauce layer.

I Made the Original Banoffee Pie

Surprisingly, Banoffee Pie is not American, it was invented in the UK.

The word banoffee is a combination of the words banana and toffee.

The main ingredients are a biscuit base, a toffee layer, a sliced banana, and whipped cream.

There are other variations to be made by changing the fruit or base.

Pass me a spoon!

If you are expecting a baby and concerned about eating banana-based desserts, check out this article on whether it’s okay to eat banoffee pie when pregnant.