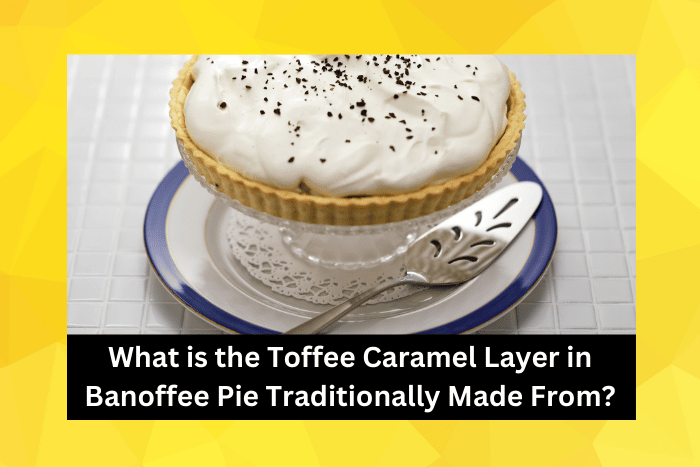 As you are enjoying your tasty dessert, have you ever wondered what is the toffee caramel layer in banoffee pie traditionally made from?

Is it toffee? Or is it actually caramel?

Perhaps you would like to have a go at making your own banoffee pie.

It looks pretty spectacular, but the toffee caramel layer is probably the most difficult part.

Let’s find out how it’s made and who invented it.

The toffee caramel layer in banoffee pie is traditionally made by boiling condensed milk. The original recipe suggested boiling the milk while still in the can, but this is now deemed unsafe. A better option is to empty the condensed milk into a small saucepan and add extra sugar and butter for a thick, creamy finish. When the desired consistency is reached, it can be spread on the base and left to cool. It is classed as toffee, not caramel, hence the name banoffee, an amalgamation of toffee and banana. If short on time, ready-made dulce de Leche can be used.

Who Invented the Toffee Layer in Banoffee Pie?

Surprisingly, despite its similarity to American cheesecakes, Banoffee Pie was invented in the UK.

It was adapted from the recipe for Blum’s Coffee Toffee Pie and is credited to Nigel Mackenzie and Ian Dowding.

The original recipe was thought to be unreliable and did not give consistent results.

And some versions called for the use of raw eggs, which can be a cause of food poisoning.

Nigel Mackenzie owned the Hungry Monk restaurant in Surrey, which sadly is no longer in existence.

After he invented Banoffee Pie in 1971, he became a minor celebrity and even published a book.

Interestingly, the spelling of his first version of the pie was Banoffi rather than Banoffee.

However, the more popular term Banoffee soon became the preferred spelling and is clearly an amalgamation of banana and toffee.

Nigel’s recipe called for the condensed milk to be boiled, but the toffee layer can also be made in the oven.

This requires placing the milk in a shallow dish, which in turn, is put in a roasting pan.

Water is then poured into the roasting pan to create a warm environment to allow the milk to caramelize.

How Long Can You Keep Banoffee Pie?

Having discovered that the toffee layer in Banoffee Pie is made from condensed milk, how long can the dessert be kept?

After all, condensed milk can be kept in a fridge for up to two weeks once opened.

So, you might think that a Banoffee Pie would have similar longevity.

Although, realistically, it will probably be snapped up within hours!

The toffee layer can actually be made in advance and can be kept in a sealed container for a week, ready to be used when required.

And if you don’t fancy making Banoffee Pie, then the toffee sauce is delicious poured over ice cream!

Once the pie is assembled in full, then it should only be kept in the fridge for three days.

You should ensure that the top layer of whipped cream covers all the sliced bananas; otherwise, they will go brown.

Sprinkling the bananas with lemon juice will also help, but could change the taste.

How to Make Caramel Filling

The toffee caramel layer in banoffee pie is traditionally made from boiled condensed milk.

Ideally, the contents should be added to a pan rather than the can be boiled unopened.

The milk can also be cooked in the oven, surrounded by a water bath.

It was invented in the UK by a restaurant owner named Nigel Mackenzie.

The toffee layer can be made in advance and stored in the fridge.

And if you are concerned about bananas turning black in your Banoffee Pie, read on!

1 thought on “What is the Toffee Caramel Layer in Banoffee Pie Traditionally Made From? (2 Sticky Facts to Know)”