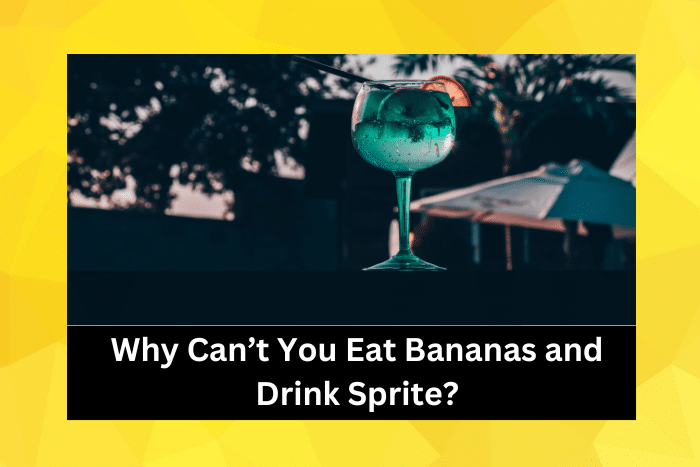 If you are perhaps feeling thirsty after your tasty snack, why should you not eat bananas and drink Sprite at the same time?

Is this even true, or is it an urban myth?

Does it matter how many bananas you have eaten?

Or how much Sprite you intend to drink?

And is it just Sprite or any fizzy drink?

And what happens if you do try this apparently not recommended combination?

Let’s delve into what may be a disgusting topic and find out the truth!

The digestive system will struggle to cope with a combination of bananas and Sprite. The average human stomach only has a capacity of 500 ml. As bananas digest slowly, they keep the stomach full for longer. Drinking a liter of Sprite on top of having just eaten a banana will result in the stomach being filled beyond its typical capacity. Add to that the effect of the carbonization in the fizzy drink, which creates gas leading to too much pressure for the stomach to cope with. The lower esophageal sphincter will not be able to keep the contents in the stomach leading to vomiting to relieve the pressure.

1. Does It Matter How Many Bananas You Eat?

So, having discovered that it’s true that bananas and Sprite are not a good mix, does it matter how many you eat?

Well, that’s not easy to answer, as it will to some extent, depend on the size of the banana.

Obviously, one small banana will take up less room in your stomach.

And conversely, a couple of large bananas will fill the stomach quickly, leaving less room for the Sprite.

Plus, not everybody has the same stomach capacity.

Another consideration is the length of time between eating the bananas and drinking the Sprite.

If you were to wait an hour, then the banana will have begun the digestion process, allowing more room for the liquid.

You may be aware that there is a challenge on the internet to encourage people to try this and film the results.

The challenge itself requires that you eat two bananas and drink one liter of Sprite, but there is no time limit.

Therefore if someone was to drink the Sprite very slowly, it is likely that they would not vomit.

Another reason why you would not want to eat bananas and drink Sprite is because of the high sugar levels in both.

The body may struggle to cope with such an excess of sugar.

2. Does the Same Reaction Occur with Any Fizzy Drink?

Why is Sprite, in particular, associated with this reaction?

There doesn’t seem to be any logical explanation for this.

The same would be true of any carbonated drink.

Sprite doesn’t cause any more pressure in the stomach than any other brand of fizzy soda.

However, it is said that drinking ginger ale with bananas may have a lesser effect.

This is because ginger is a natural anti-emetic, which means it helps soothe a nauseous stomach and excess gas.

In fact, if you drank enough plain water following the eating of two bananas, you would still vomit, regardless of the lack of gas.

You can prove that it’s not due to a chemical reaction that only occurs with Sprite.

Simply drop a banana into a bowl filled with Sprite, and nothing will happen.

One thing to note is that the coldness of the liquid is an important factor.

The carbon dioxide in the Sprite will be affected by the higher temperature of the stomach.

The gas bubbles will therefore escape from the liquid much faster, leading to a quick need to vomit.

So, we have established that it’s true, you can’t eat bananas and drink Sprite.

However, as you might expect, there are many variables, and it depends on how many bananas you consume.

And it’s not just Sprite; any fizzy soda will have the same effect.

At the end of the day, it’s not something that people would normally do, and appears to have begun as a viral internet challenge.

Oddly enough, bananas are often recommended as a natural cure for nausea rather than being the cause of it!

Feel free to try this challenge, but don’t invite me to watch the results!

If you want something equally gross to read, why not find out if bananas cause phlegm?