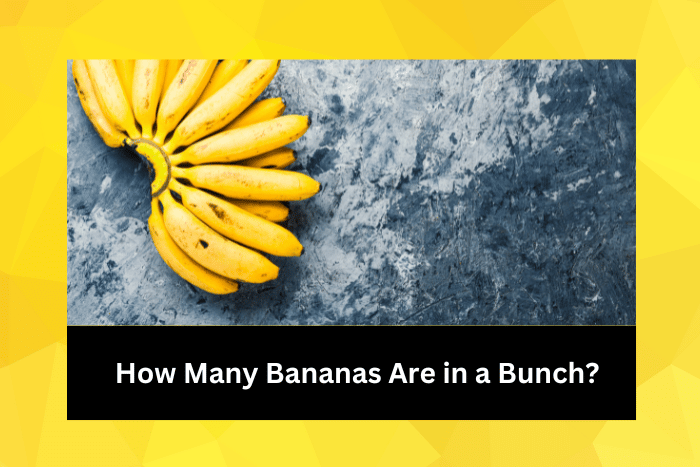 It seems like a straightforward question, how many bananas are in a bunch?

But unfortunately, the answer is anything but simple.

Did you know that most people have probably never seen a banana bunch in the truest sense of the word?

Oh no, you have been lied to.

Well, not quite. So, allow me to explain everything you need to know about bananas and bunches.

In real terms, a bunch of bananas could equate to anywhere from 12 bananas up to 300. However, most bunches typically have around 100 bananas. What you are used to calling a bunch is actually a “hand” of bananas. However, multiple hands will grow in a cluster together, and it is this cluster that is really the bunch. A bunch of bananas will generally contain 3-20 hands, and it is these hands that you are used to seeing in the store.

1. What is the Real Truth About the Banana Bunch?

It’s easy to assume that the group of bananas that you purchase in the supermarket or at the store is how they grow.

I mean, they all appear to be attached to the same stalk, so it makes perfect sense that this is how they arrived at the store from the tree.

However, this simply isn’t the case.

Bananas do actually grow in bunches, but in truth, these ”bunches” could easily number 100 or even more bananas.

In fact, much more.

A bunch of bananas will typically all be connected to the same stalk.

So, there’s a lot of hard work involved when it comes to cutting these bananas down from the tree.

If you think about it, a single bunch (in the proper sense of the word) could weigh well over 100 lbs.

Therefore, they are typically separated during the cutting-down process to avoid damage to the bananas.

2. How Many Hands Does a Banana Have?

So, let me clarify things.

A hand of bananas will typically have anywhere from four to fifteen “fingers.”

And a bunch can contain anywhere from three to twenty hands.

Therefore, as a minimum, a bunch of bananas could contain 12 individual bananas.

This means that a bunch should contain a maximum of 300 bananas (more on this in a moment).

So, there is no one perfect numerical answer for how many bananas there are in a bunch.

This will depend on the banana tree, its location, weather conditions, and of course, just pure luck.

Cutting Bananas Down From Trees

3. Are You Buying a Banana Hand at the Store?

It should now be clear by now that the bananas you purchase at the store are actually hands and not bunches.

And there is no way of telling how many bananas there will be in each hand.

This simply comes down to how they were cut down from the tree and then separated by the banana farmers.

It actually amazes me when I see people state an exact number to a “bunch.”

In fact, various users on online forums will specify that a “bunch” contains six, seven, or eight bananas.

However, as you can now tell, there is no way of knowing exactly how many fingers a hand of bananas will have.

So, don’t feel hard done by if your banana hand contains fewer fingers than you hoped for.

And by the same token, there’s no need for wild celebrations if you’ve hit the jackpot and find a hand brimming with multiple bananas.

4. What is the Largest Bunch of Bananas (EVER)?

Oh yes, there happens to be a Guinness World Record for the largest bunch of bananas grown.

This amazing bunch of bananas was harvested on 11th July 2001 and contained 473 individual bananas.

This was the result of a 30-year project conducted by a group of farmers.

Their aim was to develop a desert part of El Hierro into a tropical fruit farm.

Suffice it to say they definitely achieved their goal.

I hope you now understand that there is no specific answer to how many bananas are in a bunch.

Firstly, it’s important to realize that a “bunch” is how bananas grow on a tree.

So, a bunch of bananas typically constitutes hundreds of bananas.

What you are used to seeing in the store is a hand of bananas.

And each bunch on a tree is made up of multiple hands.

Realistically, you can expect anywhere from 12-300 bananas in a bunch.

Now you know the difference between bunches and hands, the next big question is, why should you pick bananas at night?

1 thought on “How Many Bananas Are in a Bunch? (The Bunched-Banana Lowdown)”