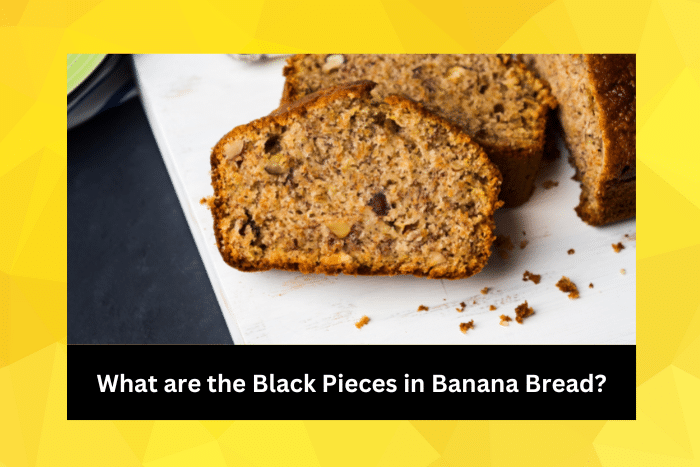 Having baked your delicious loaf, you may be wondering, what are the black pieces in banana bread?

They don’t look very attractive, does it mean your bread is ruined?

Maybe it’s not even safe to eat!

Is it something to do with the cooking process?

How can you stop the black pieces from appearing?

Let’s get to the bottom of this black banana bread mystery!

There are actually several different explanations as to why there may be black pieces in banana bread. One theory is that they are fibers from the banana that have discolored due to the chemical reaction between the acidic fruit and the alkaline level of the rising agent. Others believe that it is due to oxidization that starts immediately after the banana is peeled and exposed to the air. A further explanation is that the black pieces are fibers that carry nutrients around the fruit. The riper the banana, the darker the fibers. The final suggestion is that although bananas are cultivated to be seedless, there may still be some unfertilized seeds present in the banana.

Why Does Banana Bread Have Black Bits In It?

Have you ever noticed that sometimes there are black pieces in your banana bread?

Maybe it doesn’t bother you, and it gets eaten anyway!

Rest assured, it is perfectly safe and a natural occurrence.

However, what the black pieces are is actually a bit of a mystery as there are several different theories.

Let’s work our way through them.

First of all, it could be a chemical reaction that causes the fibers in the banana to go black.

Bananas are a naturally acidic fruit, and to make the bread, you will need to use a leavening agent such as bicarbonate of soda, which is alkaline.

This is typically the case with overripe bananas, and that is what you should be using for banana bread.

As the banana ripens, the carbohydrates break down into sugar, increasing the acidity level.

On to our next theory, which certainly makes sense to me.

This is related to oxidation and what happens when you expose a banana to air.

Obviously, you will have seen this yourself, as soon as you peel a banana, it starts to turn brown, then black.

And if you slice the banana, then it exposes even more of its surface, going black even quicker.

So, if you are chopping up or mashing a banana for your bread, then it will discolor pretty rapidly and change how your loaf looks.

A further explanation is that the black pieces are fibers from the banana, which form part of its transport system to take nutrients around the fruit.

Think of them as arteries or veins if you like.

As a banana ripens, these fibers naturally darken in color.

And, of course, we typically use overripe bananas in our bread.

Do Bananas Have Seeds?

Now, on to the final theory as to why banana bread could have black pieces in it.

But really, this would only apply if the loaf just had tiny black specks in it because we are talking about seeds.

But do bananas have seeds anyway?

Well, yes, actually, but you may not have really thought of the black dots in a banana as being seeds.

Banana plants have been cultivated over the years to be sterile, they don’t require pollination.

However, they still have very tiny seeds, and these can be seen when you slice a banana.

They are the black dots running through the center of the fruit.

So, I suppose it’s possible that these could, in turn, cause black pieces in the banana bread.

But they would be absolutely minuscule and not really stand out.

At most, they could possibly contribute to the banana bread as a whole having a darker appearance.

How Ripe Should Bananas Be for Banana Bread?

Well, I think I have posed more questions than answered them!

The black pieces could be caused by a chemical reaction or by exposure to air.

They could be banana fibers because they darken as the fruit ripens.

And finally, the black chunks could be banana seeds, but this seems pretty unlikely.

No matter what the reason, your banana bread is still safe to eat, so go ahead and enjoy!

And on a similar subject, I have some advice on stopping bananas from going black in Banoffee Pie.