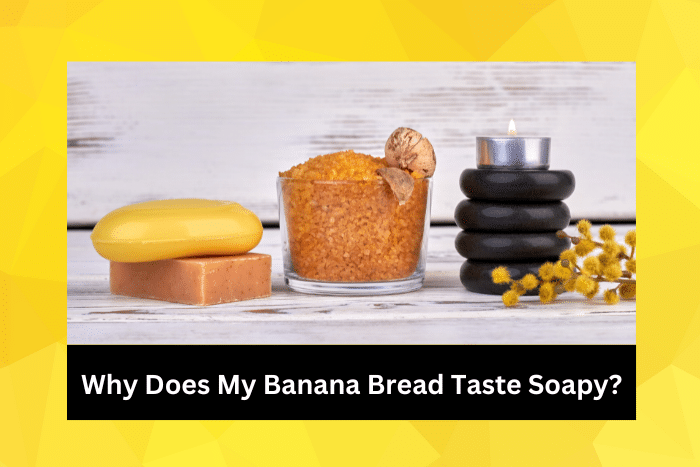 This is something you really don’t want to happen, so why does my banana bread taste soapy?

It’s not as if you deliberately introduced anything that would contribute to this weird taste!

So, is it one specific ingredient that’s responsible?

Or maybe, two different ingredients that didn’t react as expected.

Is the soapy smell or taste coming from somewhere else?

Let’s get to the heart of this soapy question!

There are many different reasons why banana bread can taste like soap, but the most likely cause is baking soda. This raising agent is necessary for a successful loaf, but it does have a peculiar taste profile. If too much baking soda is added, the soapy taste will come through in the bread. If you have purchased the bread rather than made it yourself, then it may contain lye, used as a preservative. Also known as caustic soda, lye has a soapy flavor and is often used in household cleaning products. It may not even be the bread itself that tastes of soap if you have handled it immediately after washing your hands.

Why Can Banana Bread Taste of Soap?

If this has ever happened, you will no doubt have been horrified at the result of your baking!

Nobody wants their sweet banana bread to taste like soap!

So, what’s the cause of this nasty flavor?

There are actually numerous reasons, but the main culprit is likely to be baking soda.

This is a necessary ingredient in banana bread, as it is a raising agent.

However, it really does taste like soap; it’s part of its flavor profile.

If you use the recommended amount of baking soda, then the soapy element won’t be noticeable.

But if you use too much, then the soap flavor comes across in your banana loaf.

If you are particularly sensitive to this, then try using baking powder instead.

Of course, we don’t always have the time to make our own banana bread.

If you have purchased a commercial loaf, then it may contain lye.

Lye is an alkaline solution that tastes like soap and is often found in household or cleaning products.

Of course, you must not deliberately consume lye, but it is actually approved for food use as a preservative.

It can also be used to make bread look browner.

Typically, it will be listed as caustic soda or sodium hydroxide, or potassium hydroxide in the ingredients.

It’s possible that the soapy taste has not actually come from the bread itself.

External or environmental factors could be influencing your taste buds.

For example, if you washed your hands immediately before handling the banana bread, the soap or handwash could affect the taste.

Your sense of taste also relies on odor.

So, if you are eating your tasty snack near somebody who is wearing strong cologne, your brain can be fooled into thinking that the bread contains that flavor.

It would be a similar situation if you had just done the laundry or washed the dishes.

If you ate your bread in the same room, it could give the illusion of tasting of soap.

Another reason could be if you were actually ill.

Some illnesses cause a weird taste in your mouth, such as metal, soap, or perfume.

And, of course, we all know that pregnancy can send your taste buds haywire!

How Not to Make Banana Bread

Occasionally, banana bread can taste soapy, and there are several reasons why.

The most likely cause is adding too much baking soda.

Baking soda is a raising agent but does have a soapy taste that can transfer to the banana loaf.

Lye is often used as a component of cleaning products, but it can be used as a preservative in baked goods.

And lye does taste of soap which can be evident in the banana bread.

Strong soapy odors can be attributed to handwash or fresh laundry, tricking your brain into thinking your bread tastes of soap.

However, if it truly does taste of soap, then, unfortunately, it can’t be saved, and you will have to throw your banana bread away!

But what if it’s not soapy, maybe your banana has a spicy flavor?