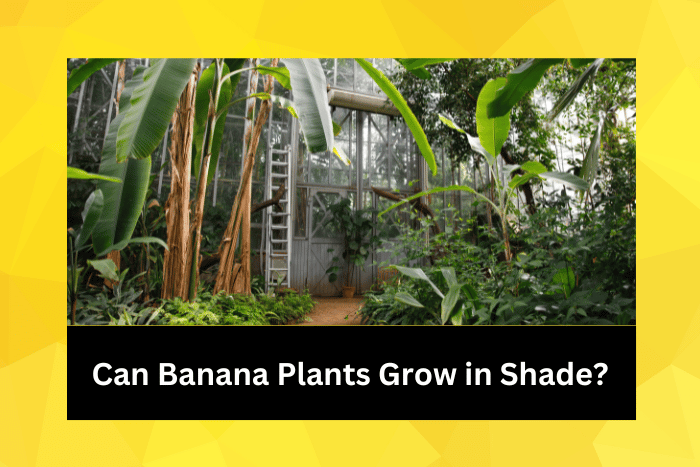 It’s a reasonable question, can banana plants grow in the shade?

I mean, not all of us have access to 16 hours a day of glorious sunshine.

Then again, perhaps the only place you can plant bananas is well-shielded from the sun.

So, allow me to explain the ins and outs of growing banana plants, shade or otherwise.

Bananas typically thrive in tropical regions where the temperature range is 78 to 86F, and the annual rainfall is 78 to 98 inches. However, bananas will still grow in shade, although they will generally take longer to flower and fruit. But bananas are not fans of extreme temperatures either way. The leaves and fruit can be prone to sunburn in very hot temperatures and are likely to die when it gets very cold. With that being said, the Musa Basjoo, or hardy banana, tends to prefer shade to sun and can grow at extremely cold temperatures.

1. What are the Optimal Growth Conditions for Banana Plants?

I’m going to come right out and say it – banana plants are drama queens.

Okay, you have your optimal conditions for growth.

Bananas are tropical fruit, so they typically thrive well in tropical conditions.

So realistically, they require a temperature of 78-86F and around 78-98 inches of rainfall a year.

However, the growth of your banana plant can be impeded by excessively high or low temperatures.

Plus, they can also be impacted by too much sunlight.

Furthermore, excessive water and inadequate drainage can also cause problems.

And just to make matters worse, you can also run into trouble with insufficient water.

Do you see what I mean?

2. Is Shade Bad for Bananas?

So, if you’re growing bananas, and the temperature regularly exceeds 90F for extended periods, you’re going to have problems.

This is actually where shade can be a good thing.

You’ll need to ensure that you keep the soil as fertile as possible, but realistically your plants will still thrive if they only receive 5-6 hours of direct sunlight a day.

Admittedly, they typically won’t grow as fast in the shade and will therefore take longer to bear fruit.

The main issue with shade is once again down to the overall temperature.

The growth of most banana varieties will drastically slow down if the temperature drops below 57F for a prolonged period.

Furthermore, at the sign of the first frost, the tops of your banana plants will die back to the ground.

With that being said, the underground rhizomes of the banana plant can survive until temperatures drop as low as 22F for over a week.

3. What is the Musa Basjoo “Hardy” Banana?

It appears that not all banana plants were created equal.

In fact, the aptly named “Hardy Banana,” or to give it its official name, Musa Basjoo, is very different from the norm.

The Musa Basjoo is capable of growing at extremely low temperatures.

In fact, it will still flower and fruit at 41F.

Nevertheless, growth once again will be limited, as the hardy banana typically thrives in slightly warmer temperatures.

The Musa Basjoo was initially thought to originate from the Ryukyu Islands in Japan.

However, we are now aware that it can cast its origins in subtropical southern China.

The Musa Basjoo is typically cultivated as an ornamental plant in Western Europe, the United States, and Canada.

And this is simply due to its excellent cultivation characteristics in cooler climates with plenty of shade.

Banana plants are more than capable of growing in shade, although their growth can be somewhat impeded.

The optimal growth conditions include full sun to partial shade.

Plus, your banana plants will thrive in a temperature range of 78-86F.

They also require plenty of water to ensure that the soil remains fertile.

With that being said, excessive temperatures and direct sunlight can cause issues with both the foliage and the fruit itself.

However, the Musa Basjoo banana prefers shade to sun and can grow at much lower temperatures than other varieties of banana.

And if your favorite yellow fruit prefers shade, is that why bananas should only be picked at night?