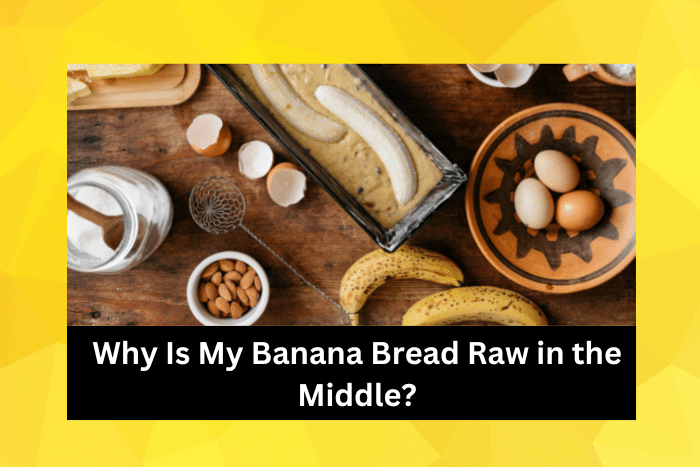 Just as you are about to enjoy your home-baked snack, you suddenly wonder why my banana bread is raw in the middle.

Is this your first time baking banana bread, or do you have a tried and trusted recipe?

What can have gone wrong, why isn’t it cooked all the way through?

Obviously, nobody wants to eat a raw loaf, and it could even be dangerous.

Imagine the embarrassment if you had entered your bread into a competition and it was still raw!

Let’s take a close look at the problem and what you can do to prevent it.

The primary reason why banana bread may be raw in the middle is simply down to not enough cooking time. As a minimum, a banana loaf takes 50 minutes, but the length of time depends on the sugar content and the moisture in the bananas. The bread should not be removed from the oven until it is fully baked. Ideally, the sides and the top of the loaf should be dark brown. A toothpick can be inserted into the center of the banana bread and should come out clean, with no mix sticking to it. A constant oven temperature should also be maintained, and ensure the oven is already warm before adding the loaf.

1. Why Does Banana Bread Take So Long to Cook?

If you are a keen baker, you are probably used to your delicious goodies being ready in less than 30 minutes.

But when it comes to banana bread, it will take at least 50 minutes or even an hour or more.

But why does banana bread take so long to cook?

Bananas are classed as a wet ingredient, and once mashed, even more moisture is produced.

This makes for a wetter loaf mix which will take longer to cook.

Sugar is also added to the bread mix, and this has the effect of caramelizing the bananas.

The caramel will remain gooey when you first take the banana bread out of the oven, and for the best results, you should let it solidify.

This adds a further 15 minutes to the process.

But it will make the bread easier to slice.

Some people like to add extra ingredients to their banana bread recipe, and if these are liquid or contain any moisture, it will add to the cooking time.

This can include peanut butter or any form of alcohol, such as rum or bourbon.

If the mix looks too wet, you can always add extra flour to get the right consistency.

Be careful not to add too many mashed bananas, but this is really trial and error and depends on so many variables, such as the size of the fruit.

2. How Can You Rescue Raw Banana Bread?

So, what if the worst result has happened?

You have fetched your banana bread out of the oven too soon, and it’s still raw in the middle.

How can you bear the disappointment on your children’s faces?

Is there a way to rescue the banana bread to ensure it is edible?

The most obvious answer is to simply pop it back into the oven for a bit longer.

If the crust is already the desired caramel brown color, you can cover it with foil to stop it from burning.

What if it actually isn’t really raw?

This can happen if you don’t leave the banana bread to cool properly before you slice it.

The steam within the loaf will give the appearance of a raw mix, but if left for up to an hour, the banana bread will firm up.

If further cooking or allowing it to cool doesn’t help, don’t be tempted to eat it anyway.

The presence of undercooked eggs can be dangerous, especially to elderly people or young children.

Can You Save Banana Bread That You Took Out of the Oven Too Early?

We have now learned that the main reason your banana bread is raw in the middle is that it hasn’t been allowed to cook for long enough.

Other culprits can include too many bananas or other wet ingredients.

And if it’s too late, and the bread is raw, simply pop it back in the oven for a bit longer.

Or allow it to cool for up to an hour.

Banana bread may take a long time to cook to ensure it’s not raw, but it’s worth the wait!

If you need to find out if your loaf is actually raw, there are ways of checking banana bread without using a toothpick.