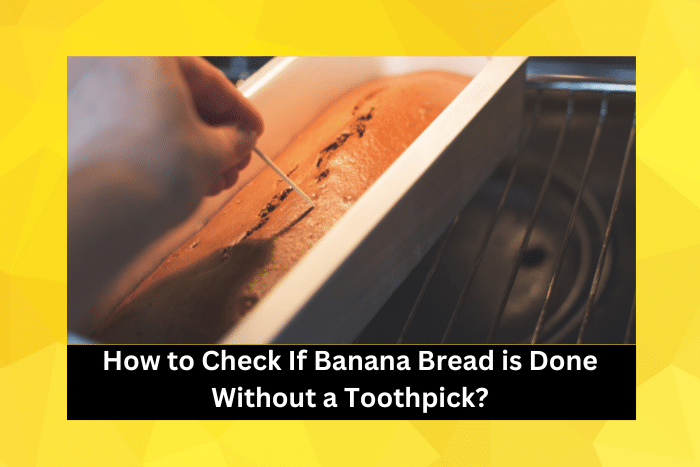 Is this a question you are puzzled about – how to check if banana bread is done without a toothpick?

Many of you will know that using a toothpick is the tried and tested way to check your banana bread.

But have you thought about the science behind it, why we actually do this?

Maybe you have a different method, or perhaps you don’t check at all and just cross your fingers for luck!

Let’s have a look at this toothpick conundrum!

Checking if banana bread is cooked in the middle is essential, and this is typically done using a toothpick. By inserting the toothpick in the center of the bread, it is possible to tell if it is cooked through. If the toothpick comes out clean with no mix clinging to it, the bread is ready. The same test can be done by using a wooden skewer. A thin-bladed knife works equally well. More unusual methods include using a clean bristle pulled from a broom! However, some people believe that any method of testing is unreliable, as the banana slices themselves will always remain moist and therefore stick.

Checking Banana Bread Without a Toothpick?

So, how do you know when your banana bread is ready?

It’s obviously not possible to know just by looking at it.

The outside could be a gorgeous golden crispy brown, but inside it could be a soggy, undercooked mess!

One of the tried and tested methods is to use a toothpick.

You need to insert a clean and dry toothpick directly into the center of the banana bread.

When removing it, if the toothpick has no batter mix clinging to it, then clearly, the banana bread is done.

A few stubborn crumbs are acceptable!

This is all well and good, but what if you haven’t got a toothpick handy?

What else can you use instead?

The most obvious substitute is a wooden skewer, such as you would use on a barbecue.

In fact, I think that this is a better option anyway, as it is longer and can reach further into the banana bread.

Toothpicks are typically quite short and may not reach all the way to the center of the loaf.

Another option is a thin-bladed knife.

This could be a paring knife, for example.

Now here’s a weird idea – using a clean bristle from a broom!

Not sure if that appeals to me, really.

Does Checking If Your Banana Bread is Done Really Work?

So, having decided that you can use not only a toothpick but also a skewer or a knife, does the test work anyway?

Some people believe that it can give false results.

If you think about it, even when cooked, the banana slices still retain some moisture; they never fully dry out.

So, if your toothpick slides into a piece of banana, it could still come out as wet, even if the loaf is cooked.

You would probably then put it back into the oven for longer and possibly overcook it.

Don’t just rely on the first test; try again in a different area of the banana bread.

Of course, you can rely on science and use a thermometer.

You need to be looking for a temperature of around 205 degrees in the center of the loaf.

The edges of the banana bread should be somewhat cooler at approximately 200 degrees.

Can You Save Banana Bread That You Took Out of the Oven Too Early?

Using a toothpick is a popular method of checking if your banana bread is done.

If you don’t have a toothpick, you can use a wooden skewer or a knife with a thin blade.

However, the results may not be accurate as the banana slices will always remain moist.

The only true way to measure if your banana bread is done is to use a thermometer.

If in doubt, return to the oven but check every 5 minutes or so.

You could easily go from one extreme to the other – undercooked to overcooked.

And nobody wants that either!

But what if it’s too late, what can you do about raw banana bread?