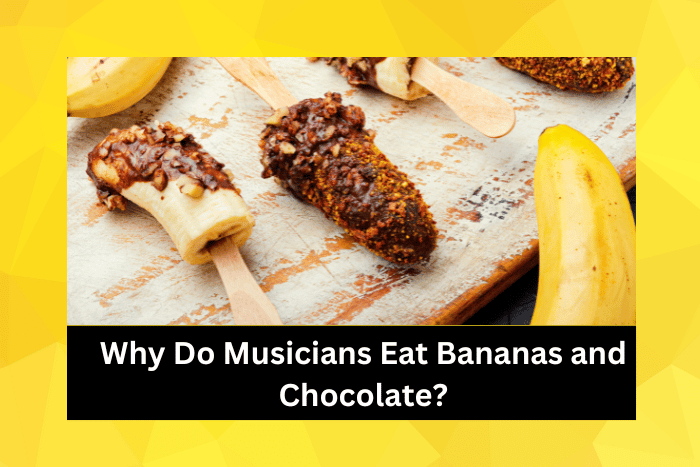 Who else wants to know why musicians eat bananas and chocolate?

This probably seems a little strange, but these are often the go-to pre-performance snacks for musicians.

This may make you wonder whether there’s some magical formula to these two ingredients that the rest of us aren’t party to.

Allow me to reveal the Banana-Chocolate secret.

The main reason that musicians eat bananas and chocolate is for the calming effect they have. Bananas are a great source of potassium, which is a beta-blocker, so they can help to slow a performer’s heart rate down. Dark chocolate can improve blood pressure and blood circulation, which typically go haywire when you feel nervous or anxious. However, both bananas and chocolate are best avoided by singers pre-performance due to the effect they can potentially have on the throat.

1. Can Bananas Calm You Down?

Firstly, I think it’s important to state that bananas and chocolate aren’t generally consumed together by musicians.

No, this is some slightly weird concoction that has a mystical effect.

So, let’s look at bananas first.

Most musicians, irrespective of how experienced they are, will feel nervous just before their performance.

I’m sure you’ve felt the same way yourself if ever you’ve had to “perform” in any way.

Bananas are said to have a calming effect on both the mind and body.

In fact, you’ll often see a musician chowing down on the yellow fruit just before going on stage.

Their stomach is probably doing somersaults, and although it’s recommended to eat something prior to performing, nerves can do some very strange things.

Bananas have an extremely soothing effect on gut health due to pectin.

Furthermore, bananas are packed-full of potassium, which is a source of beta-blockers.

And beta blockers are known for “blocking” certain hormones like adrenaline.

This, in turn, will help to slow the performer’s heart rate down.

So, in effect, all the usual symptoms of nerves and anxiety, which can also include shaking and sweating, can be nullified by eating a banana.

With that being said, bananas aren’t able to perform miracles.

And there are even those who claim that this is simply the placebo effect.

However, whether for real or placebo, most musicians will swear by a pre-performance banana.

2. Is All Chocolate Created Equal?

Now, when I speak of chocolate, I mean dark chocolate.

So, not the highly processed, extremely sweet milk chocolate.

Dark chocolate is actually viewed as a superfood, but this is the unsweetened variety with a high percentage of pure cacao or cocoa solids.

Musicians (and many of us) will typically look for a product that has at least 70% dark chocolate.

With that being said, there are varieties that boast 85% plus dark chocolate.

Once again, dark chocolate is ideal for musicians mainly due to the calming effects it has.

And, of course, nerves, stress, and anxiety can certainly play their part in temporarily increasing blood pressure.

Additionally, the flavonoids found in dark chocolate are known to boost memory and cognitive function.

This is ideal for any performer.

3. Why Should Singers Be Wary of Bananas and Chocolate?

If you’re a singer, you can certainly enjoy many of the health benefits of bananas and chocolate.

However, it definitely isn’t recommended just before going onto the stage.

Unfortunately, bananas can lead to excessive mucus production immediately after eating them.

This can, of course, impact on the throat and your vocal performance.

The same can be said for chocolate, especially milk chocolate (or any dairy product), so this should be avoided too.

As a singer, you would be far better off consuming fresh ginger with boiling water to produce ginger tea.

Additionally, lemon in water can help to loosen any mucus build-up.

Plus, cinnamon will help to soothe a sore throat.

But if you’re about to use those vocal cords, then bananas and chocolate are best avoided.

What to Eat Before Singing

I hope you have a better idea of why musicians eat bananas and chocolate.

As you can see, this is mainly due to the calming effect they have on both the brain and the body.

The potassium in bananas can help to slow down a performer’s heart rate.

Whereas dark chocolate will help to regulate blood pressure and blood circulation.

With that being said, both ingredients should be avoided by singers pre-performance due to excessive mucus build-up.

Other than chocolate, another combination you might be curious about is whether peanut butter and bananas should be eaten together.