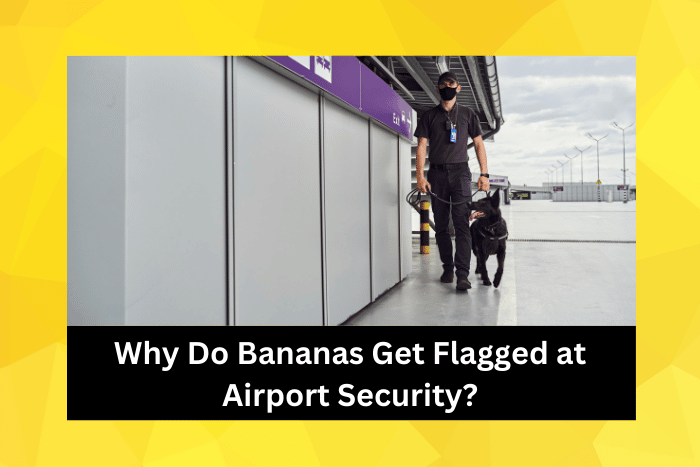 It’s one of those strange occurrences that’s hard to explain; why do bananas get flagged at airport security?

You would think that there wouldn’t be any issues with enjoying your favorite yellow fruit when you’re traveling.

However, more often than not, bananas seem to get flagged by airport security.

And this even happens when your banana(s) is hidden within your hand luggage.

So, what is it about bananas that are such a problem for airport scanners?

There are various reasons why bananas get flagged at airport security. Firstly, due to their high potassium content, bananas emit a tiny amount of radiation. However, this is enough to be picked up by airport ionizing radiation scanning equipment. Furthermore, bananas sometimes cannot be fully identified within your hand luggage, so you may be asked to show exactly what it is that you’re carrying. Plus, if you’re taking an international flight, there may be strict rules about bringing fruits and vegetables into the country.

1. Are Your Bananas Radioactive?

One of the main reasons that bananas get flagged by airport security is that they are ever so slightly radioactive.

A single banana will emit approximately 0.01 millirem of radiation.

However, before you start panicking, you would need to ingest around 10,000,000 bananas in a single sitting to potentially be exposed to a lethal dose of radiation.

Then again, it has also been calculated that a person would need to eat approximately 300 bananas a day for seven years for borderline symptoms of radiation to show.

So, in effect, the radiation content of bananas (well, potassium, to be exact) is not dangerous to health unless you’re eating bananas excessively.

But, then again, eating any food in those quantities will not be good for health.

However, quite often, they will detect something completely innocent, such as a banana.

2. Can Airport Scanners Identify a Banana?

If your banana hasn’t been flagged due to its minuscule radioactive content, then it could simply be the case that airport security is unable to identify it.

Most airport scanners will sense X-ray shadows cast by the objects in your hand luggage and suitcases.

It is the shape and darkness of various objects that it used to identify them.

Now, when it comes to bananas, you would think that it’s fairly easy to determine what it is, but this isn’t always the case.

Additionally, there are certain objects that airport scanners are unable to penetrate, which will produce black and shaded areas on the scan.

This is referred to as an X-ray opaque object.

X-ray opaque objects include some metals, crystals, and certain types of glass.

So, as an example, a camera lens will come back as an X-ray opaque object.

Therefore, if you were to have a banana sitting right next to a camera lens in your hand luggage, a small amount of radiation will be detected alongside an X-ray opaque object.

This would immediately be a cause for concern for airport staff.

3. Are You Taking an International Flight?

Something else to consider is where you’re flying to and from.

By this, I mean that there are different rules typically imposed on domestic and international flights.

As an example of this, if you were flying into the U.S.A. from a foreign destination, then you wouldn’t be able to bring a banana into the country.

The United States has some extremely strict rules about bringing fruits and vegetables into the country.

This is mainly due to the risk of spreading diseases and pests to crops in the USA.

Funnily enough, even if you’re traveling from Hawaii, Puerto Rico, and the U.S. Virgin Islands to the U.S., you won’t be able to bring most fruits and vegetables on board.

In fact, the same can be said if you’re flying from the mainland U.S. to Hawaii.

Hawaii requires you to declare all fruits and vegetables in your luggage if you’re flying from the U.S.

These will be inspected upon your arrival in Hawaii and could well be confiscated from you.

You’ll also find that many foreign destinations around the world will also prohibit fruits and vegetables from being brought into the country.

So, I hope you understand that there are a variety of reasons why bananas get flagged at airport security.

This could be down to the small amount of radiation found in potassium, which would be enough to get detected by the ionizing radiation scanning equipment.

Additionally, a banana may be difficult to identify in your luggage.

This is especially true if you also have X-ray opaque objects in your luggage too.

Finally, many countries around the world will have some very strict rules about bringing fruits and vegetables into the country.

So, now you know why your favorite yellow fruit sets off airport security scanners, is that the same reason why you shouldn’t microwave a banana?