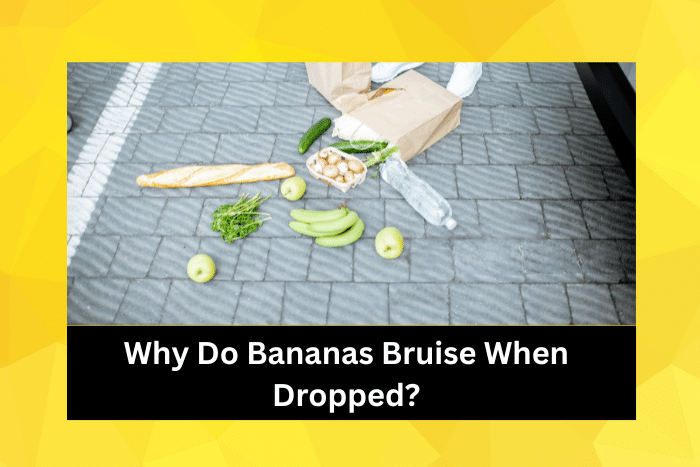 If you’re as inquisitive as me, you’ll want to know, why do bananas bruise when dropped?

It doesn’t matter whether your banana experiences a slight impact or is dropped from a great height; it bruises.

What’s that all about?

Allow me to explain why that dropped banana bruises and whether it affects the overall quality.

The main reason that bananas bruise when dropped is that the cell structure of the fruit has been broken. This, in turn, means that the chemical compounds found in bananas react with oxygen, thus causing the bruise. However, a banana that bruises due to an impact is different from the natural bruising (brown or black spots) found in ripening bananas. Bruising makes a banana more susceptible to infection, although you’ll notice this through sight or smell. However, in most cases, the banana is perfectly safe to eat.

1. Have You Broken the Banana (Cells)?

These are present in banana flesh.

They are also typically present in a wide variety of foods.

These include coffee and tea, berries, nuts, various vegetables, and of course, bananas.

Polyphenols are vital for a plant’s defenses, especially against the sun, bacteria, and other microorganisms.

When you drop a banana, this will break the structure of the cells, which causes the polyphenols to mix with enzymes and oxygen (from the air).

This process is actually known as polyphenol oxidase, and it is this enzyme that is responsible for banana bruising.

In effect, it turns the skin of the banana brown, and in some cases, the inside too.

It actually only takes the slightest impact for this chemical process to fire into action.

So polyphenol oxidase can occur if you drop a banana, squeeze it too tight, or even if other items are placed on top of it in your shopping bags.

2. Are the Bruises Different From a Ripening Banana?

The bruising that occurs through impact is different from that of a ripening banana.

You’ll typically notice that as your banana ages and ripens, it will begin to produce brown or black spots.

In fact, these can often be bruise-like in appearance.

This usually occurs through the hormone ethylene.

Ethylene will surge through the banana as it becomes ready to ripen.

And it is the production of ethylene that causes a banana to turn from green to yellow and eventually brown or black.

This is actually why you may have heard that in order to ripen a banana quicker, you should place it in a paper bag.

Basically, ethylene will become trapped in the paper bag, and with the addition of oxygen, the banana will ripen faster.

With that being said, the same process will not occur when bananas are in a plastic bag, as they generally are in most stores and supermarkets.

There is a link at the end of this article that tells you more about this.

3. Is it Safe to Eat a Bruised Banana?

Firstly, it’s important to note that if your banana has become bruised through impact, then it is more susceptible to infection.

Remember that the cell structure has been broken, and the process of polyphenol oxidase has started.

With that being said, this doesn’t automatically mean that a bruised banana is no longer safe to eat.

In fact, a banana that becomes naturally brown over time, whether on the peel or the flesh, is actually healthier than an unripe banana.

A brown banana will contain more antioxidants, whereas the resistant starch will have converted to simple sugars.

This also makes a banana easier to digest.

However, a banana that has been bruised through impact or being dropped has literally been “forced” to brown early.

It should still be perfectly safe to eat, but you will need to be extra wary.

As long as you don’t spot any fungal activity through sight or smell, then you’re good to go.

As a ballpark figure, always eat a bruised banana within a day or two of dropping it.

So, hopefully, you understand that bananas bruise when dropped because the cell structure has been broken.

This causes the polyphenols to react with other enzymes and oxygen.

And this process will bruise the banana by turning the peel, and often the flesh, brown.

However, a bruised banana is still perfectly safe to eat as long as you can’t see or smell any fungal activity.

As mentioned earlier, here is what you need to know about whether bananas will ever ripen in a plastic bag.