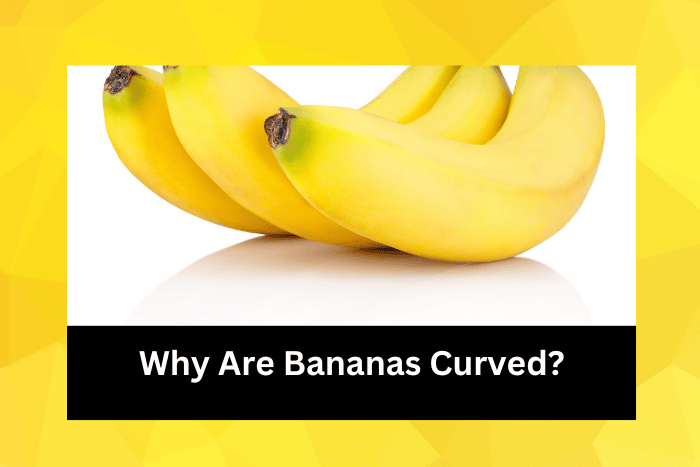 It’s something we’ve all wondered but probably never asked out loud, why are bananas curved?

Bananas are one of the cheapest and most consumed fruits throughout the world, and they definitely have a very distinctive appearance.

In fact, you’d be hard-pushed to find any other type of food that is, well, bent!

So, how exactly do bananas take on their unique shape?

Allow me to reveal the story behind the bendy banana.

The reason why bananas are curved is due to a process called negative geotropism. So, initially bananas start by growing towards the ground, but will eventually start growing towards the sun. With that being said, you’ll often find that some bananas are completely straight. This is because of an innovation known as bagging, whereby the fruit is covered in order to protect it from insects and animals.

1. What Are the Effects of Negative Geotropism?

You’ll typically find that all bananas are curved.

Some more than others.

I will say that there can be a difference in curvature depending on genetics, climate, and even where in the bunch a banana grows.

And the main reason that bananas are curved is because of a process known as negative geotropism.

Geotropism specifically means the growth of a plant with respect to gravity.

Whereas negative geotropism simply means the growth or movement of an organism away from the stimulus (gravity in this case).

So, in the case of bananas, they grow away from gravity.

However, this isn’t the case throughout their entire growth journey.

Bananas initially start out as banana buds which grow from the pseudostem.

This is the strong trunk in the middle of the banana tree.

The banana buds eventually grow into flowers, although they resemble large red petals.

It is these “red petals” that enclose the banana fruits as they first spring into life.

When you first see the banana fruits bloom, they look like delicate, little yellow flowers.

As the fruit continues to grow they get longer and change color from yellow to green.

But, they still do not take on the banana shape we all know and love.

In fact, they are finger-like in appearance.

However, once they get to this stage the bananas get larger and heavier and start sinking toward the ground.

Then the effects of negative geotropism kick in, as the bananas start to gravitate towards the sun’s rays.

And this is when bananas start to take on that familiar shape.

2. Why Are Some Bananas Straight and Others Curved?

Have you ever noticed that some bananas are fairly straight? (They are still slightly curved)

In fact, you could have some bananas on a bunch (or a hand as they are actually called) that are straight, whereas others are curved.

Then again, you may even end up with a hand of bananas that all seem to be straight.

This all comes down to these specific bananas not having access to the sun’s rays.

Firstly, this may happen if some bananas are at the back of the bunch and therefore blocked from the sun by other bananas.

However, the most common reason for this is known as bagging.

Bagging is an innovation attributed to Carlos Gonzales Fajardo of Guatemala in 1956.

This involves placing a cover over a bunch of bananas in order to protect it from damage from insects or other animals.

Bagging is also used to protect bananas from rubbing against leaves or from chemical products which are applied.

So, it is perfectly feasible that some bananas turn out straight while others are curved.

3. What Are the Stages of Banana Growth?

You can check out the following video, which takes you through the various stages of banana growth.

You’ll see the initial pseudostem, followed by the banana buds growing into flowers.

Then the first banana fruits, which look like tiny yellow flowers.

Before, they finally grow, elongate, and curve towards the sun.

I hope you now have a better idea of why bananas are curved.

As you can see, this is down to a process known as negative geotropism.

This simply means that the bananas start growing against gravity and towards the sun.

However, some bananas can turn out straight if they are unable to access the sun’s rays.

The most common reason for this is bagging, which will protect the bananas from potential damage.