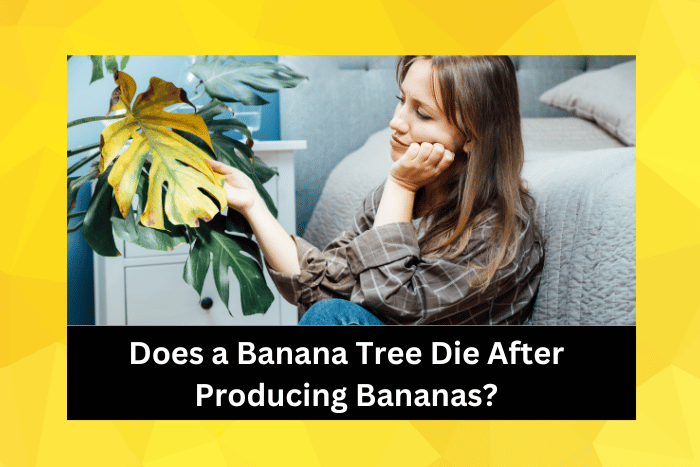 It’s a strange thought, but does a banana tree die after producing bananas?

It doesn’t seem logical; how does the same plant keep growing bananas?

Maybe it goes into some kind of hibernation and returns to life later.

What should you do if your banana tree is dying?

Is there a way of keeping a banana plant alive?

Let’s take a closer look at the subject of dead banana trees.

The main stem of the banana tree dies after producing bananas. However, that is not the end of the plant. The initial stem of the banana tree grows upwards from a rhizome (also called a rootstalk). The plant goes through several stages until it produces bananas after approximately nine months. Once the bananas are produced, the stem dies back, but almost immediately, new shoots, known as pups, began to grow from the rhizome. The original stem should be cut back to allow room for the new plants. This cycle continues for six years, which is the maximum lifespan of a banana tree.

1. What Happens When a Banana Tree Dies?

You may be surprised to learn that a banana tree dies when it has produced its first batch of fruit.

Banana trees never produce more than 12 hands of bananas, and they all grow at the same time.

(If you are puzzled by how many bananas are in a hand or in a bunch, check out the information linked below this article.)

Once that initial batch of fruit has been produced, it appears as though the banana tree is dead.

However, it is only the main stem of the tree that dies.

To better understand this, you need to know that a banana tree grows from a rhizome or a rootstalk.

The rhizome is capable of growing many banana trees.

Once the first stem dies, the initial banana tree, new shoots sprout from the rhizome.

Each of these shoots becomes a new banana tree, each capable of producing more fruit.

This whole process repeats itself every nine months.

The new stem grows, bananas are produced nine months later, and then that stem dies.

There is nothing you can do to stop the banana tree from dying in this way.

However, the entire lifespan of a banana tree is only six years.

At that point, no more new stems will be produced.

One thing to note is that your banana tree may appear to be dying but hasn’t actually produced any fruit yet.

If this is the case, it is more than likely due to colder temperatures.

Once the warmer spring weather arrives, you should start to see renewed growth.

2. Should You Cut Dead Growth From a Banana Tree?

If you are lucky enough to have your own banana tree, you may be wondering if you should cut any dead sections.

As you now know, the main stem will die after producing its solitary batch of bananas.

It will serve no further purpose and should be cut back.

You can cut it to within six inches above the soil.

It won’t be long before new shoots emerge, and each one will become a new banana tree and produce fruit.

It may be better to just have two or three plants rather than too many all competing for the same amount of nutrients.

Pick the strongest shoots and cut all the others down to the soil line.

The leaves of a banana tree may also die.

New leaves appear continuously, and the older ones turn brown and die.

The dead leaves will dry up and should be cut from your banana plant.

Otherwise, it is likely that insects will see the curled-up dry leaves as the ideal place to build a nest.

Some insects can damage a banana tree, so removing any dead leaves will discourage them.

You can use a knife or shears to cut the dead leaves, whatever your preference.

Don’t discard the leaves, they can be used as a natural mulch and help to provide necessary nutrients.

Simply chop them up and spread them around the base of your banana tree.

Does a Banana Plant Die After Blooming and Producing Fruit?

It’s true, banana trees really do die after producing their one and only batch of bananas.

This is a natural process and cannot be changed in any way.

However, new shoots will grow from the original rootstalk, creating new banana trees.

All dead growth should be removed from a banana plant.

So, don’t be sad when your banana tree dies; you will soon have lots of replacements and more fruit!

You may encounter another problem depending on your garden and need to know if banana plants like shady environments.