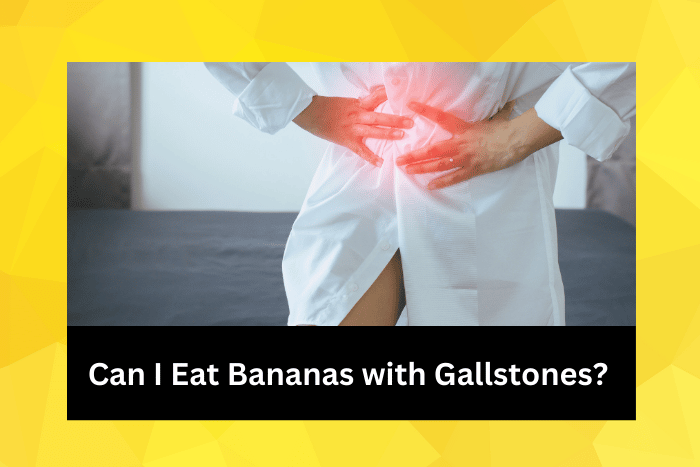 I’m sure it’s something that you want to know, can I eat bananas with gallstones?”

Gallstones are no joke, and the pain can be pretty much unbearable.

You’re probably aware that certain foods can make the pain even worse (if that’s possible).

In fact, you may even find yourself trying to avoid eating anything, although you know as well as me that’s just not possible.

So, is our beloved yellow fruit okay to consume with gallstones, or is it another favorite food that has to be banished to the scrap heap?

It’s absolutely fine to eat bananas with gallstones. Bananas do contain sugar, which can actually cause gallbladder problems and issues with gallstones. However, sugar absorption from bananas is slowed down due to their dietary fiber content. With that being said, unripe bananas typically contain over 50% more fiber than ripe bananas. You’ll mainly want to avoid foods high in sugar, saturated, and trans fats if you have gallstones.

1. What is the Banana Sugar Conundrum?

The main issue when it comes to consuming bananas with gallstones is their sugar content.

Basically, bananas, when it comes to macronutrients, are all carbohydrates.

And the vast majority of these carbs will convert to sugar.

So, your initial reaction could well be that bananas are best avoided with gallstones.

With that being said, bananas also contain fiber, which again is a type of carbohydrate.

But, when it comes to digestion (and gallstones), fiber is actually a good thing.

Most carbohydrates are typically broken down into sugar molecules in the body and then digested.

So, you could say that consuming excessive carbs will lead to excessive amounts of sugar in the bloodstream, which in turn can actually make gallstones worse.

However, the body is unable to break down fiber, and therefore it will pass through the body undigested.

Fiber helps to regulate the body’s use of sugars, which means it will keep your blood sugar in check.

So, without the sudden spikes in blood sugar levels typically associated with sugary and easily digested carbs, you’ll find that bananas won’t affect your gallstones.

2. Are Unripe Bananas Better For Gallstones?

Something else to consider is the ripeness of the bananas you’re eating.

The reason I say this is that the more ripe a banana is, the more of the initial starchy carbs will have converted to sugar.

So, in effect, a very ripe banana, perhaps with brown or black spots, will contain far more sugar than an unripe green banana.

It also happens that the unripe green banana will have a higher concentration of fiber.

A very ripe banana will typically contain around 1.9g of fiber.

However, an unripe green banana will generally contain around 3g of fiber.

So, in effect, an unripe banana could contain up to 12% of your daily fiber requirement, based on an average 2,000-calorie-a-day diet.

Therefore, if you really want to be on the safe side when it comes to eating bananas with gallstones, then aim to consume unripe, green bananas.

You’ll still get to enjoy that wonderful banana taste, but with the added incentive that you’re consuming a higher percentage of fiber.

3. Which Foods to Avoid With Gallstones?

I’ve mentioned that excessive sugar consumption can cause problems with gallstones.

Additionally, these types of foods will also contain trans fatty acids, which can aggravate gallstones.

In fact, any type of additional fat can irritate gallstones.

It’s recommended that you avoid foods with more than 3g of fat, especially if these are saturated and trans fats.

However, this also means that many foods that are typically viewed as healthy are best avoided with gallstones.

Additionally, most dairy products can be quite high in fats, including milk, cheese, butter, cream, etc.

Furthermore, greasy and fried foods are difficult to break down.

So, not only will these foods aggravate gallstones, but they can also lead to their formation.

Basically, most of the foods that you probably know are bad for you will also cause problems with gallstones.

However, one thing’s for sure, eating bananas is absolutely fine.

Avoid These Foods If You Have Gallstones

So, as you can see, it’s okay to eat bananas with gallstones.

The fact that bananas contain a high amount of fiber will mean that they won’t aggravate gallstones in the same way as other high-carb foods.

However, you should be aware that unripe, green bananas contain much more fiber than their bright yellow, brown, or black-spotted counterparts.

In the main, you’ll want to avoid high fat, and high sugar, as well as greasy and fried foods with gallstones.

Something else that might be on your mind is whether bananas are bad for your kidneys.