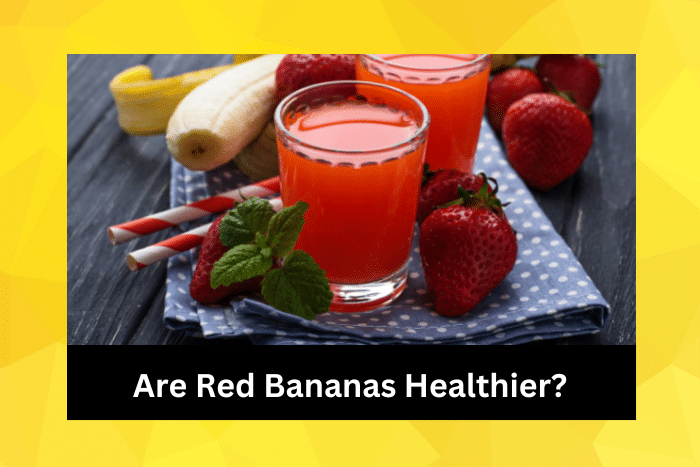 Just looking at a red banana, it does seem to be visually healthier than its yellow counterpart.

Whether it’s the size, the color, or simply the fact that red bananas are harder to come by, I have no idea.

But is this actually true?

Will red bananas provide much more health benefits than other bananas?

Or is there little difference between the wide varieties?

Red bananas are generally said to be healthier than yellow bananas, although when you compare like-for-like nutritional values, there isn’t actually that much of a difference. In truth, red bananas contain more Vitamin A and are ever so slightly lower on the glycemic index. However, all other nutritional values are more or less equal. So, you could say that red bananas and yellow bananas are as healthy as each other.

As I’ve mentioned, I’m not entirely sure what it is, but red bananas do visually appear to be healthier than conventional yellow bananas.

This probably has much to do with the fact that we don’t see red bananas as often, plus the color does give red bananas a healthy glow.

However, red bananas are not actually any healthier or more nutritious than yellow bananas.

In fact, I’m actually quite surprised by much of the information you find online, which categorically states that red bananas are much healthier.

However, both red and yellow bananas are of the Musa variety, which also means that there will be a lot of similarities between them.

And this extends to their nutritional values.

I also think that many people claim that red bananas are more healthy because they’re not viewing this from a like-for-like perspective.

What I mean by this is that red bananas are generally smaller and lighter than yellow bananas.

So, if you’re going to compare the two, then surely you should be looking at stats for equal size and weight of both bananas.

As an example, it is said that red bananas contain much more vitamin C than yellow bananas.

It is also said that red bananas have more potassium.

However, once more, there will actually be very little difference between the two.

In fact, the levels of calcium, iron, magnesium, phosphorus, potassium, and zinc, which are common to ALL bananas, will depend on the soil and the environment within which the bananas are grown.

So, this certainly wouldn’t make them healthier or more nutritious.

2. What Color Banana is the Healthiest?

As it turns out, the healthiest color of a banana is neither red nor yellow.

In fact, the healthiest banana will always be green.

Bananas are mainly made up of carbohydrates.

However, in a green banana, the carb content will be highly resistant starch.

But, as a banana begins to ripen, you’ll typically notice it becomes yellow, often with brown or black bruising, plus it is much softer to the touch.

Unfortunately, what has happened here is that the starch form of carbs has now been converted into sugar.

This will also explain why a ripe banana is so much sweeter.

So, if you’re looking to eat bananas for health reasons, perhaps even to lose weight, then the greener, the better.

So, I hope you understand that there isn’t actually much in it when it comes to whether red bananas are healthier than yellow bananas.

In truth, they both come from the Musa family of bananas and will therefore have many similarities between them.

It said that red bananas have more vitamin C and potassium, but this simply isn’t true.

In fact, the healthiest of all bananas will be green due to the fact that the carbs are still starch and haven’t yet been converted to sugar.

If you are looking for green fruit but then change your mind and prefer yellow, I have written an article on how to ripen bananas in a plastic bag.