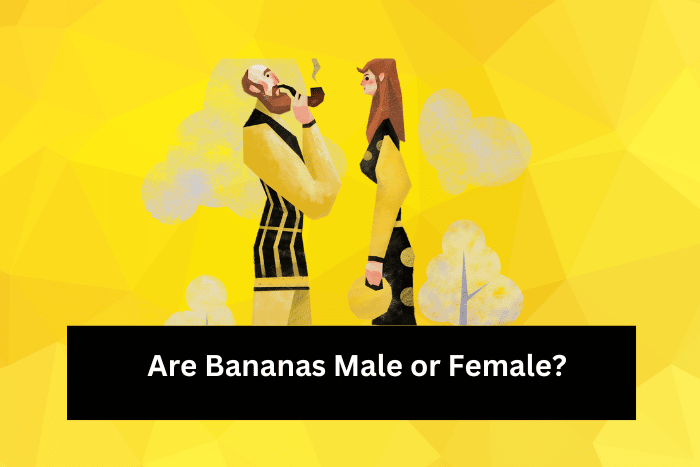 How often have you looked at your tasty snack and wondered, are bananas male or female?

Does their somewhat phallic shape make them male?

Or are they female, thanks to their sensuous curves?

Now I have put the idea in your head, let’s find out the answer to this burning question.

Plus, read on to discover why banana plants have male and female flowers and how long it takes for a banana to grow.

Bananas themselves have no gender, but the plant has both male and female flowers. As a banana plant grows, it produces flower stalks, which begin to bend as it matures. This stage can take 10 to 15 months. This is followed by the appearance of the female flowers, and these are the ones that produce the fruit. The female flowers always appear from right to left. Male flowers develop below the female flowers but don’t produce any bananas. Eventually, the male flowers will fall off, as they serve no purpose. Banana plants produce their fruit without the need for pollination.

1. Why Do Banana Plants Have Male and Female Flowers?

If banana plants can produce fruit without pollination, then why is there still a need for a male flower at all?

To answer this, we need to consider that actually, wild banana plants still reproduce in a natural way, requiring both male and female flowers.

It is only the plants that we have domesticated over the years that can develop edible fruit without pollination.

And there’s a scientific name for that – parthenocarpy, meaning the fruits are seedless.

Handy to know if you are a fan of trivia quizzes!

The male flower doesn’t produce much nectar and is rarely visited by insects.

So, in the wild, where pollination is required, the main pollinators are bats and birds.

The flowers have a strong, unusual odor that is particularly appealing to bats.

Interestingly, the male banana flowers are approximately half the size of the female flowers.

Unlike domesticated bananas, the flowers appear randomly, not in a right-to-left pattern.

A female flower that does not receive any pollen will still develop a banana, but it will be tiny and malformed.

And did you know that the clusters of banana flowers are called hands?

Pretty obvious why, if you think about it!

2. How Long Does It Take for a Banana to Grow?

Now that we have found out that only female flowers produce the fruit, how long does it take for a banana to grow?

Typically, this is between four and six months, depending on the amount of moisture in the ground and the temperature.

The ideal growing temperature is the mid-80s Fahrenheit.

Although thought of as a tropical fruit, bananas can be grown in many countries but cannot tolerate frost.

Banana plants need to be in direct sunlight for most of the day for the best results and typically grow to around 16 ft tall.

You can tell the fruit is beginning to ripen when there is a hint of a color change from green to yellow.

When the banana begins to develop, it is actually almost square in appearance and doesn’t become the round shape that we are all familiar with until it is nearly ripe.

The banana will need to be picked when it is still predominantly green in color.

If it is left on the plant until fully ripe, the skin is likely to split.

Each individual plant will only produce flowers and fruit once and will then need to be cut down.

We have now discovered that although the bananas themselves have no gender, there are both male and female flowers on the plant.

The edible species that we know and love do not require pollination, and as such, there is actually no need for a male flower.

Who would have guessed the connection between bats and bananas?

And finally, to get your hands on a banana, you will have to wait up to six months after the flower has appeared.

Worth the wait? Only you can answer that!

If you are interested in learning more about the structure of the fruit, take a look at what I have to say about the black tip of the banana!