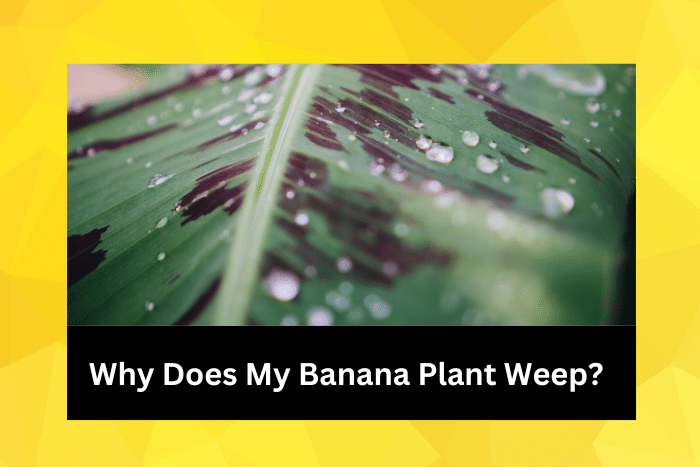 If you grow your own fruit, have you ever asked yourself, why does my banana plant weep?

Of course, if you don’t have a banana plant, you may wonder what I am talking about.

Perhaps you have a vision of the plant having had a bad day and getting a bit upset!

But no, it is simply a strange occurrence when a banana tree appears to be leaking some form of liquid.

Read on, and I will solve the mystery of the weeping banana plant.

It is no cause for concern if a banana plant is weeping as it is a natural phenomenon. Drops of liquid can often be seen on banana leaves, particularly in the morning. It can be seen as a form of perspiration, an attempt to lose excess water, and is actually a sign of a healthy banana plant. The scientific term for this is guttation, and it is the process of water forcing its way through the banana plant leaves. If the banana plant has taken on excess water during the day, this extra liquid would evaporate through tiny holes in the leaves called stomata. However, the stomata often close at night, and the water appears to weep from the banana plant.

1. Why Does My Banana Plant Drip Liquid?

You are most likely to see your banana plant weeping or dripping first thing in the morning.

It is a natural occurrence and is nothing to be worried about.

The actual process is called guttation which is a scientific term for the way water moves through a plant at night.

Let’s look at the difference in how your banana tree copes with excess water during the day.

As water enters the banana plant through its roots, it is naturally forced up through the stem and into the leaves and the fruit.

However, sometimes, perhaps after a heavy downpour, the banana tree has more water than it needs.

The banana plants’ leaves have tiny holes in them, which are called stomata.

If the plant needs to get rid of the excess water, it simply evaporates through the stomata, and you won’t even know this is happening.

But it’s a different story at night because the stomata close when it’s dark, and the excess water now has nowhere to go.

This is when guttation occurs.

The water still needs to escape, so it is forced out as visible droplets at the edge of the leaves.

The weight of the water will cause the leaves to droop, and the liquid will drip off the banana plant.

And so, it looks as though the banana plant is weeping!

2. Is the Liquid from Banana Plants Safe?

Although it may look somewhat disturbing when a banana plant is weeping, we now know it’s nothing to worry about.

However, what about the liquid itself that exudes from your banana plant?

Do you need to wipe it off the leaves?

Will it damage the fruit?

Before I answer that, let’s look at another scientific term, and that is the xylem.

It’s simply a fancy name for the part of the banana plant that conducts nutrients, sap, and water.

In other words, the xylem is a tissue that transports water and gathers nutrients along the way to ensure the banana plant is healthy.

So, if the excess water is forced out of the banana tree at night, it will actually contain nutrients that the xylem has added to it.

One surprising side effect of this is that bees enjoy the water that weeps from the banana plant.

The excess water will contain sugar, and this attracts the bees.

There is no reason to clean the water from your banana plant leaves as it helps bees to survive, which is necessary for the ecosystem of our planet.

The liquid will also fall naturally from the leaves and go back into the ground, and be reabsorbed by the banana plant’s roots, thus continually feeding and watering itself.

Even if some of this excess water were to land on the banana fruit itself, it would not do any harm.

Can You Really Overwater a Banana Plant?

A weeping banana plant is not a cause for concern.

It is simply a result of excess water not being able to evaporate and usually occurs at night.

The liquid is quite safe and does not need to be wiped from the plant.

On the contrary, it should be left alone as bees like to sip the water for its nutrients.

And it will drip back into the ground to feed and water the banana plant in a continuing cycle.

There is no need to cry if your banana plant is weeping!

But, of course, that’s not the only issue to consider if you grow your own fruit, so you might need to find out if it’s possible to root banana trees in liquid, such as water.