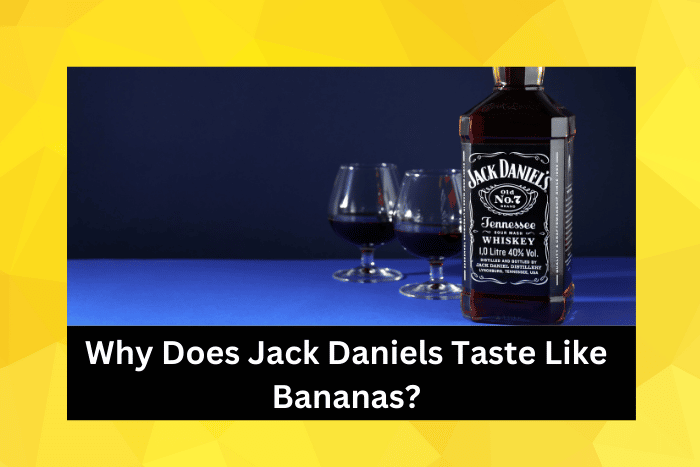 If you are partial to an occasional glass of Bourbon, you may be wondering why does Jack Daniels taste like bananas?

After all, it’s not listed in the ingredients.

Does it add to the flavor?

Are there genuine bananas in Jack Daniels, or is it an artificial taste?

Come on then, drink up, and follow me to the truth.

The fermentation process of Jack Daniels requires the use of yeast which produces alcohol and organic acids. This forms an ester, and in the case of this particular Bourbon, one that tastes of bananas. The ester in question is Isoamyl Acetate, which not only creates a banana flavor but also has notes of pear and is used in boiled sweets. No actual bananas are used in the production of Jack Daniels; thus, the fruit is not included in the list of ingredients. The premium version of Jack Daniels, Gentleman Jack, has an even more pronounced taste of bananas.

Are There Any Bananas in Jack Daniels?

Noticing that familiar fruity taste, you may have asked yourself if there are any real bananas in Jack Daniels.

I can say for certain that there is no fruit involved in the production of my favorite Bourbon.

The banana taste arises as a result of the fermentation process.

The use of yeast is a requirement to produce alcohol, and this, in turn, forms an ester.

In the case of Jack Daniels, that particular ester is called Isoamyl Acetate, and this adds a banana flavor.

If you prefer the more upmarket version of Jack Daniels, Gentleman Jack, you will notice an even stronger taste of banana.

To some, this may be more appealing, whereas to others, it may be somewhat overpowering.

Apparently, the same ester is used in the production of Bud Light beer, and this, too, has a faint flavor of banana.

A popular way of drinking Jack Daniels is to mix it with coke, and surprisingly, this enhances the banana flavor.

However, it does make it overwhelmingly sweet for my taste.

What Other Alcoholic Drinks Taste of Bananas?

So, if you particularly enjoy that hint of banana in your alcoholic drink, what else could you try?

As mentioned previously, Bud Light is one option as the same ester is present.

However, for a true taste of bananas, there are many liqueurs that are entirely based on the fruit.

The base of the drink is neutral-tasting alcohol, to which a banana extract is added.

Further sugar is typically added to enhance the sweetness of the banana flavor.

These liqueurs are typically used in cocktails when a banana flavor is required.

Using fresh bananas in a cocktail not only looks unappealing, but the taste is usually too mild.

Banana liqueurs usually include vanilla or spices to subtly enhance the flavor.

Surprisingly, many of them are green in color rather than the bright yellow you might expect.

The Banana Note in Jack Daniels (Where Does It Come From?)

Jack Daniels does not contain any real bananas despite the pronounced flavor of the drink.

The banana taste comes from the production of an ester called Isoamyl Acetate.

This happens during the fermentation process.

Other true banana-flavored alcoholic drinks are available in the form of liqueurs.

Next time you fancy a glass of Jack Daniels, look out for that familiar banana taste!

And now, let’s look at this from the other angle and find out why bananas taste of alcohol!