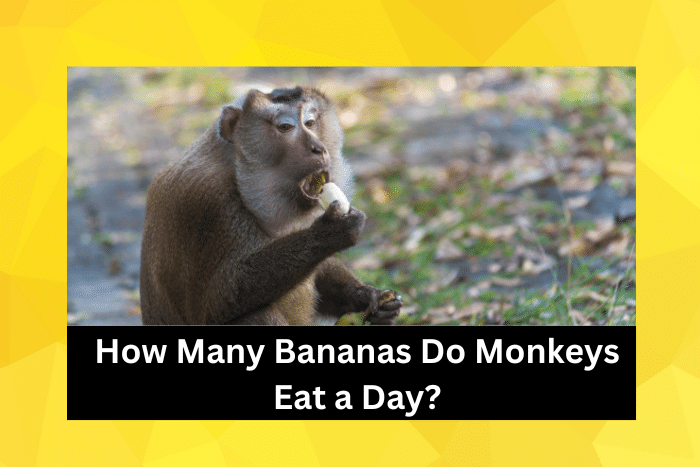 How often have you watched these cute creatures on TV and wondered, how many bananas do monkeys eat a day?

Must be quite a lot, you would think!

Every time you see an image of a monkey, it always has a banana clutched in its hand.

What if I told you that some monkeys don’t eat bananas at all?

And that others prefer insects?

Some monkeys even hunt for meat.

The species of the monkey also plays an important role in their banana preferences.

I guess it’s time to take a deeper look into the subject of monkeys and bananas.

The number of bananas that monkeys eat in a day depends on several factors, including the primate species, their size, and their environment. Smaller monkeys, such as marmosets, will rarely eat bananas and prefer insects. The wild banana plants typically have inedible fruit, so monkeys have only relatively recently begun to enjoy bananas if they come across the domesticated variety. This means that the monkey’s location would need to be near human habitation to discover edible bananas. Medium-sized primates can eat up to five bananas per day but will only do so if no other fruit is available, as they enjoy a varied diet.

1. Do Monkeys Even Eat Bananas At All?

Not all species of monkeys eat bananas, and some are unlikely to have ever seen an edible version of the fruit.

Wild banana plants do not have edible fruit.

A monkey is only likely to come across an edible banana if it finds a plant near human habitation.

And even then, a banana wouldn’t be the monkey’s first choice.

Especially if there are any grapes around, which are definitely top of the menu as far as a monkey is concerned.

Bananas are actually bad for our primate cousins as they contain a lot of sugar, and monkeys can also be affected by diabetes and tooth decay.

In fact, the monkey’s stomach has evolved to prefer high-fiber foods that digest slowly.

Zoos have come to realize the dangers of bananas, and many of them now refuse to include them as part of their monkey diet.

Proboscis monkeys cannot eat ripe fruit at all, including bananas, as the fermenting sugars bloat their stomach and can actually kill them.

So, if monkeys rarely eat bananas, does that mean that perhaps they are not vegetarian and actually enjoy meat?

Surprisingly yes, there are 89 monkey species that do eat meat.

In fact, they are omnivores and will eat flowers, fruits, nuts, and seeds, as well as meat.

The most likely prey of a primate will be birds, and monkeys will also eat their eggs.

However, they will also eat amphibians, reptiles, and occasionally fish.

The meat will only make up approximately one percent of their diet.

Some chimpanzees will make use of sticks to hunt smaller creatures.

So, not only do monkeys rarely eat bananas, they are actually omnivorous hunters.

That has probably ruined any thought you may have that monkeys are cute and cuddly, as often portrayed in children’s books!

What Else Do Monkeys Eat Besides Bananas?

Far from answering the question as to how many bananas monkeys eat a day, we have now discovered that they rarely eat them at all, let alone on a daily basis!

Monkeys will only eat bananas if they come across the domesticated variety developed by humans.

And some monkeys cannot eat them at all, as the fruit can be fatal to them.

Some monkeys enjoy meat and actually hunt their prey, which probably came as a surprise to you.

Oh well, more bananas for you if the monkeys aren’t bothered!

If this has sparked your interest in the relationship that other animals have with your favorite yellow fruit, why not take look to see if bananas are safe for guinea pigs?

1 thought on “How Many Bananas Do Monkeys Eat a Day? (2 Surprising Banana Monkey Facts)”